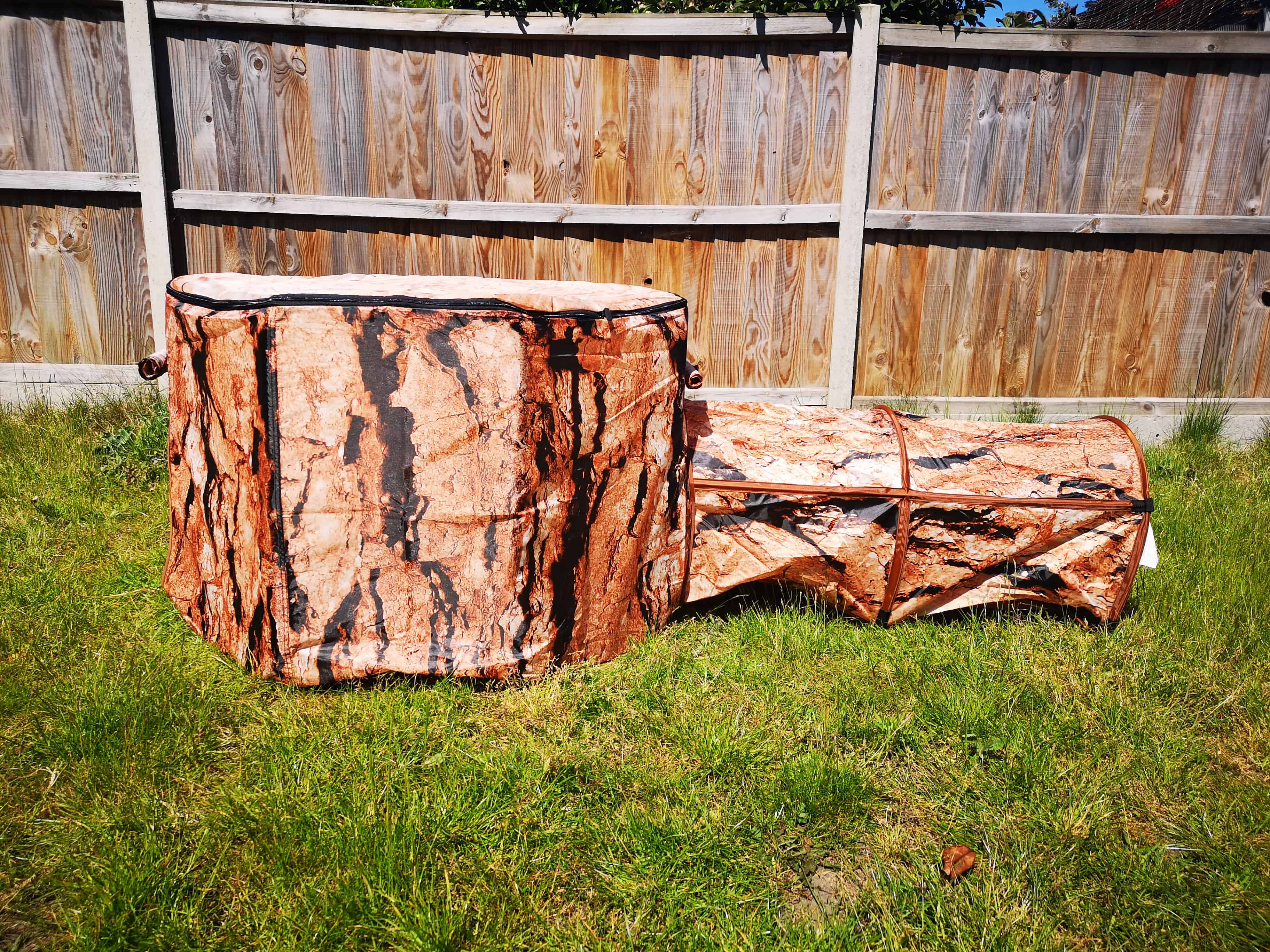 We are always looking for new ways to get outdoors and playing in the garden is usually our go to choice. However, finding outdoor toys for Erin isn’t the easiest task especially if we don’t want to spend hundreds of pounds. Leaf Education recently got in touch to see if we wanted to try out their Natural Tree House and Tunnel though and I knew it would be something that Erin would enjoy playing with.

When the product arrived I couldn’t get it out of the box quick enough. The tree house and tunnel are designed to go with a standard Tuff Tray stand and it can be purchased with or without this. We were sent the tree house, tunnel and Tuff Tray stand so that we had everything we needed for the maximum amount of fun. Construction only took about 10 minutes and it would have probably been easier had I not tried to do it myself. The tree house fits over the Tuff Tray base and I somehow managed to get it a bit twisted and had to start over.

I have to be honest and say that when I looked at the images of the Natural Tree House and Tunnel online I wasn’t sure that it was going to be big enough for Erin at 3.5 years old. However, when the whole thing was put together I realised that there was actually a lot of space in there. 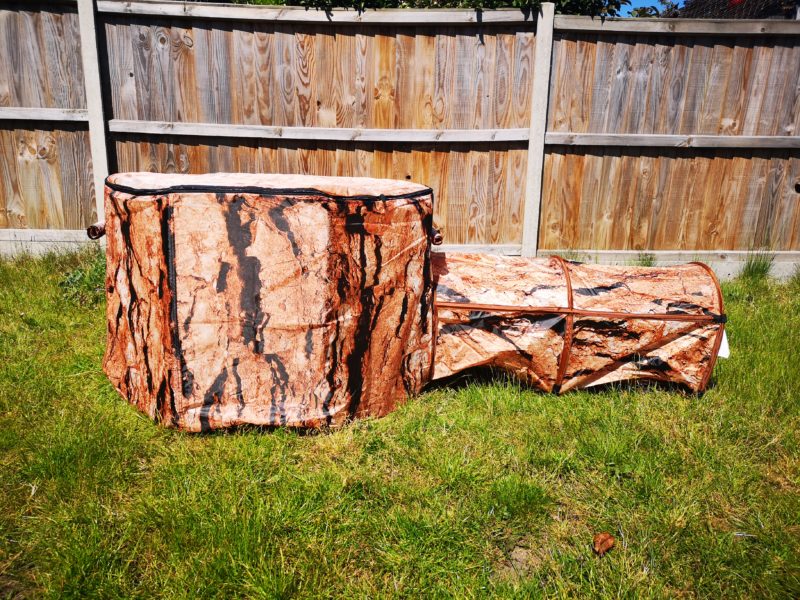 As you can see, the Leaf Education Natural Tree House and Tunnel is made up of the main tree house and a tunnel leading off to one side. The main tree house is lifted up and around the Tuff Tray stand and then kept in place with velcro tabs. There is also a detachable roof so you can have it either open or closed, depending on what your child wants to do. The tunnel is a separate piece which is also attached by two velcro tabs on one of the door entrances. The whole set comes with a bag to keep the fabric pieces in for when you take it down. 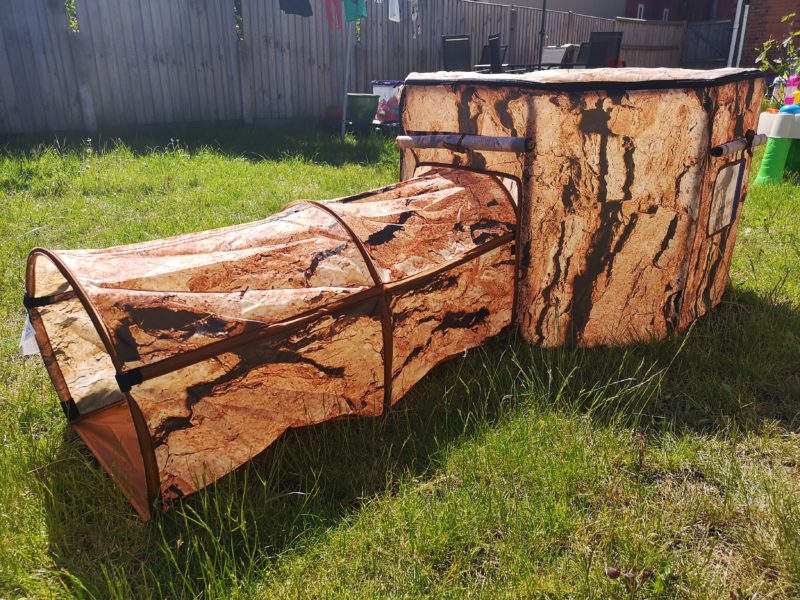 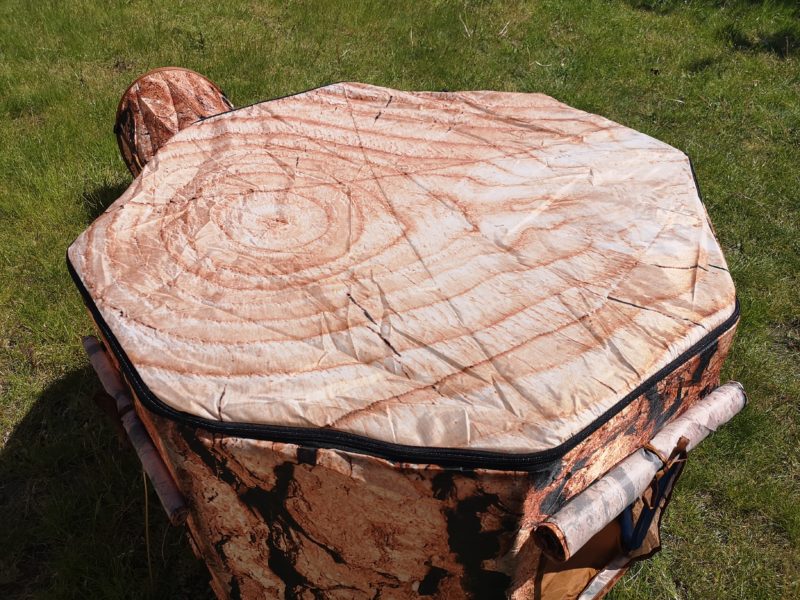 The main tree house part has 2 door type entrances, both of which have flaps which can be rolled up and secured to keep them out of the way if needed. There is also a window on one side which has the same kind of covering which can also be rolled up. It’s nice that there is the option to have all of the openings covered as it means children can easily do things like play hide and seek! 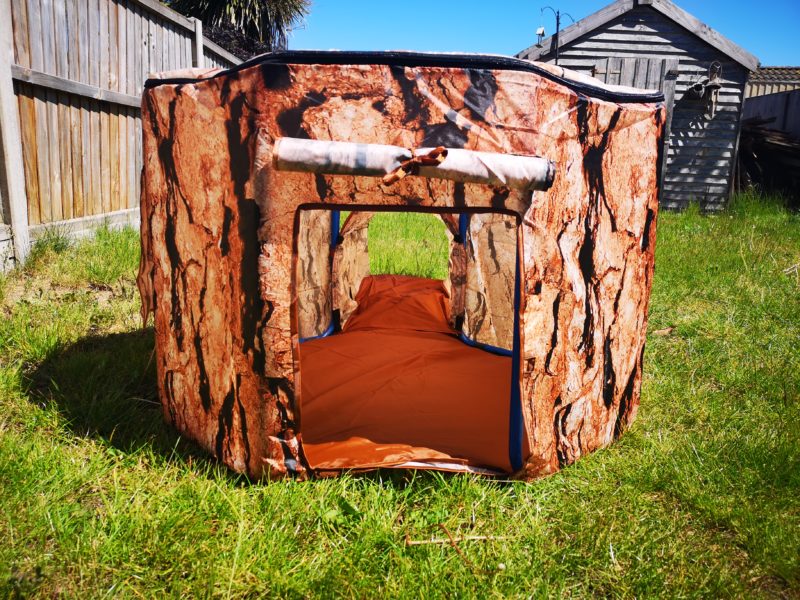 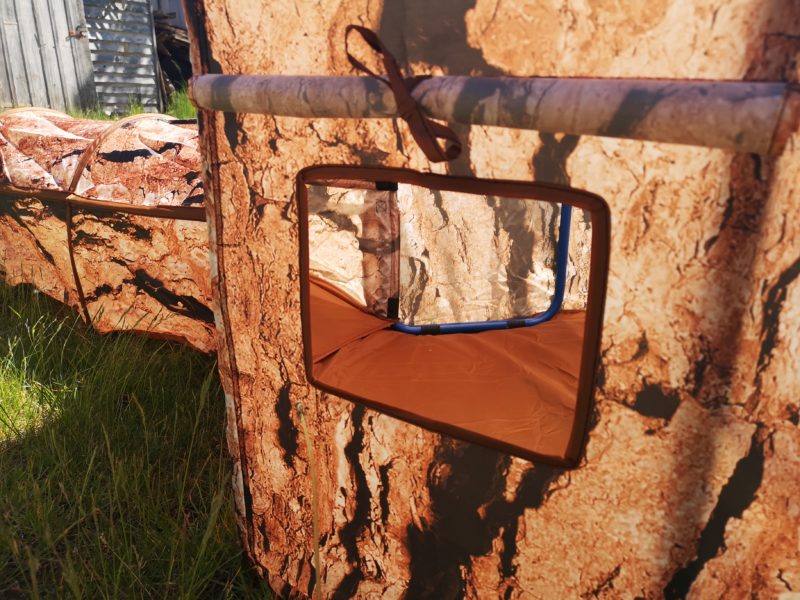 I kept this a bit of a surprise from Erin until she’d come home from nursery and I’m so glad I did. As soon as she saw it in the garden she shouted ‘a den!’ and ran straight over to see what it was like. Instead of just diving right in like I first thought she would, Erin spent a while figuring out where the doors where, how the roof came on and off and whether or not she could climb in through the window. 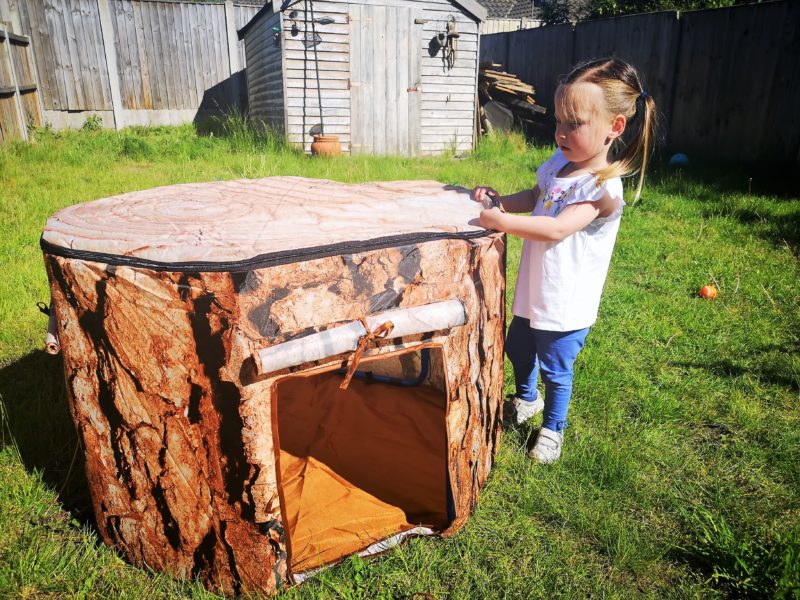 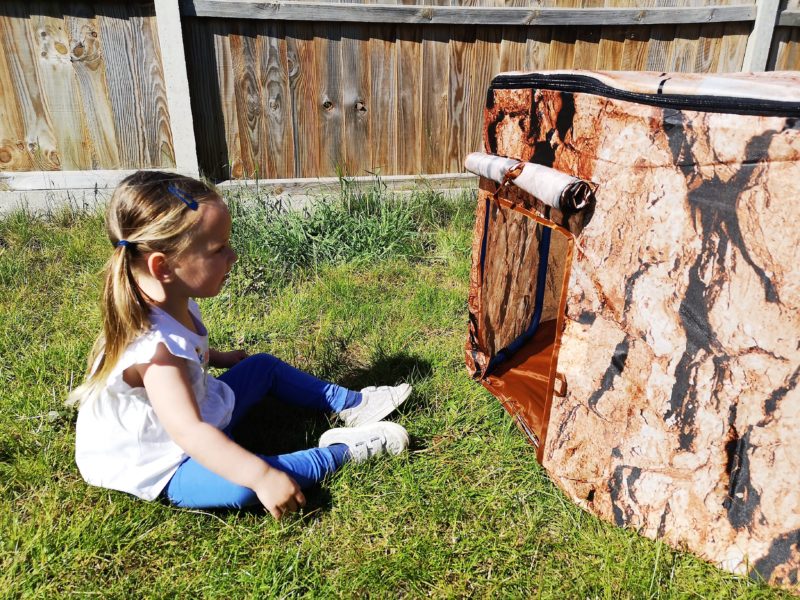 As soon as Erin got inside there was no stopping her! She uses the tree house part as her den and has decked it out with a huge brown blanket to make it more comfortable and she takes various toys in there each time. Erin has used the tunnel to play ball games with me and her Dad as well as making it a great place for a pretend sleep! There are so many ways that this can be played with and Erin is always coming up with something new. 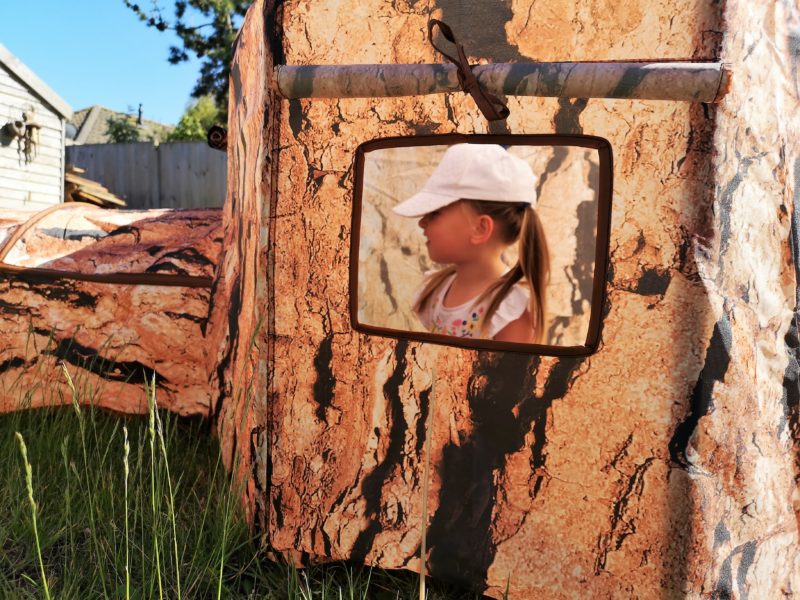 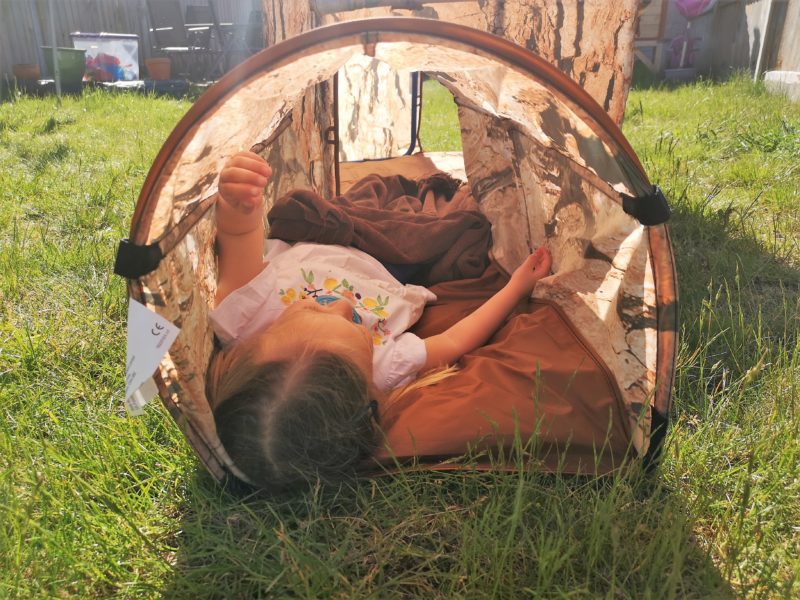 The whole thing is showerproof so can withstand a little bit of rain but it’s not something that should really be left outdoors. The tunnel folds up really easily and can be put in the bag supplied but having to take down the tree house part every time (unless you have somewhere huge to store it) is a bit of a pain. The only other minor niggle that I have is that the Tuff Tray stand isn’t a more suitable colour. We were sent a blue stand and it really stands out and doesn’t look very natural with the product. A brown or black stand would have been a much better idea. 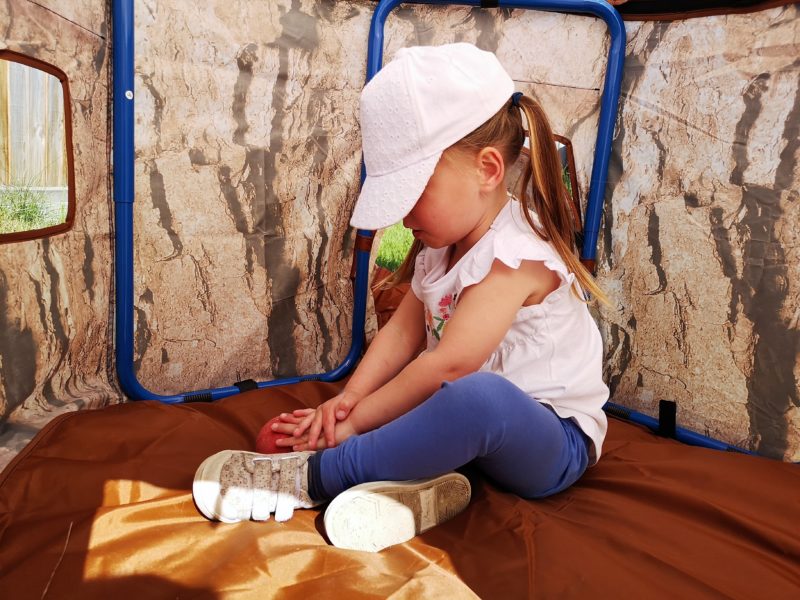 Since getting the Leaf Education Natural Tree House and Tunnel Erin has played with it every single time we’ve been in the garden. Although not a cheap outdoor toy, it’s one that Erin will get a lot of use from. She is happy playing in it on her own, taking toys in there and we’ve also had her cousins round to play as well. I know that this is something that Erin will play with for such a long time to come and it’s a great addition to our garden. 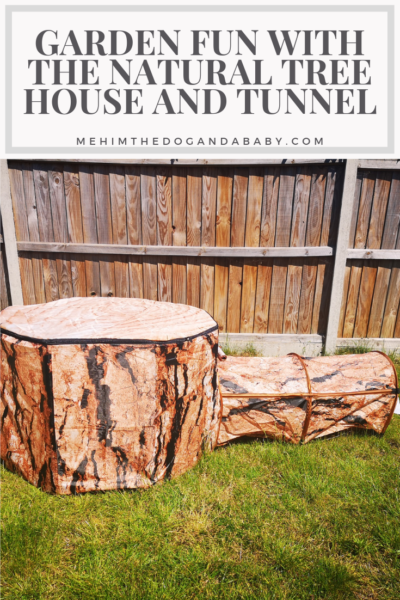