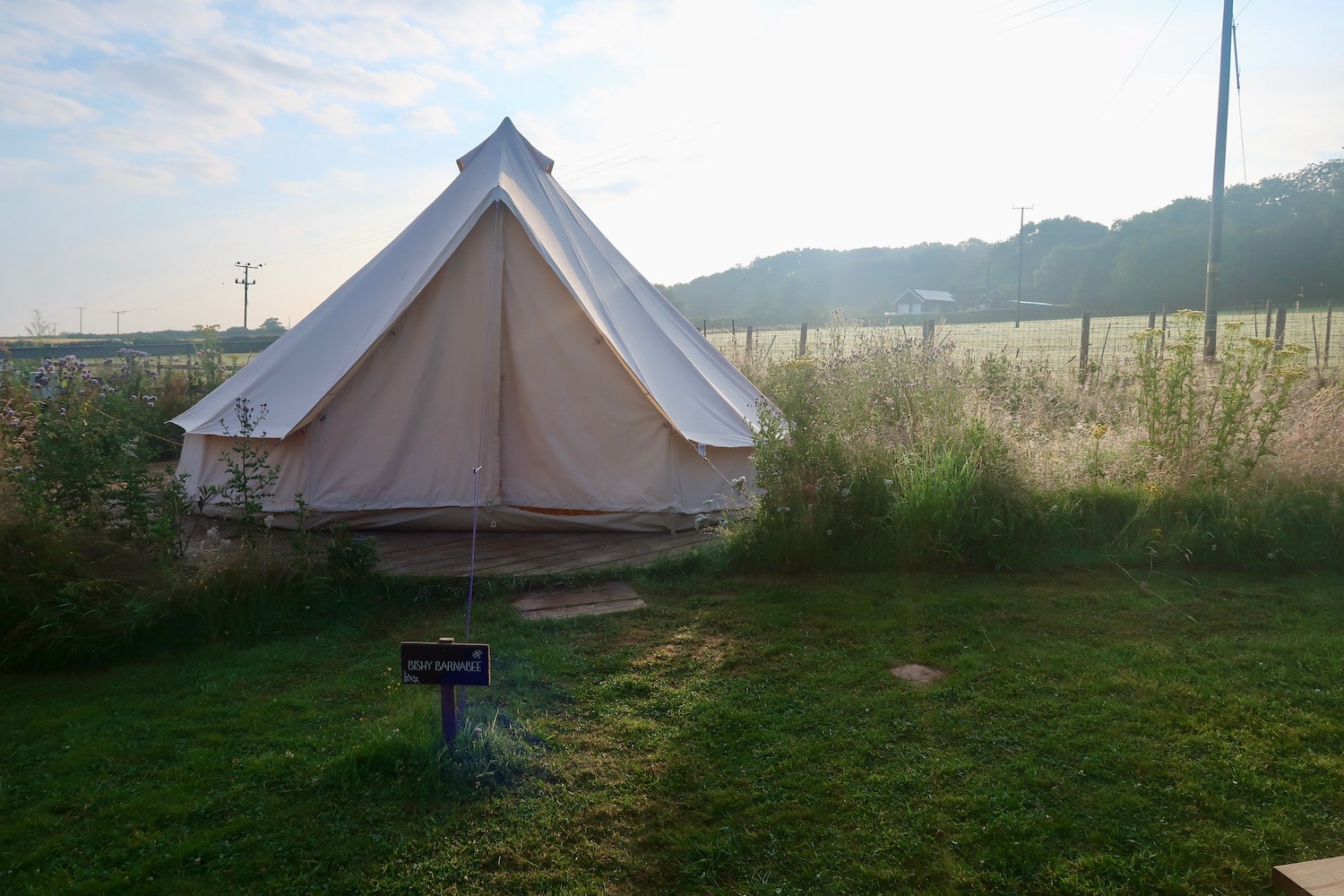 Way back in August 2019 I booked for us to go glamping at Bumblebarn Bell Tents for the very first time. The trip was supposed to happen in summer 2020 but because of Covid that didn’t happen. Luckily, we were able to rebook quickly and easily so we chose the first weekend of the summer holidays this year for our trip and we were finally able to go last week!

Bumblebarn Bell Tents is located in Beeston Regis, Norfolk which is near Sheringham. From Norwich it is around a 45 minute drive, 10 minutes from Cromer or just over 1 hour from King’s Lynn. As we are a non-driving family we got the train to Sheringham and then a taxi which only took a few minutes.

Bumblebarn Bell Tents is a small glamping site made up of only 4 bell tents. This was partially why we chose this place over others. As people who haven’t camped before, or not since we were children, we wanted somewhere small and intimate and somewhere that didn’t feel overwhelming. Beckie, the owner, is also really friendly and approachable and was happy to answer any questions that I had beforehand.

When booking our stay I specifically asked for the Bishy Barnabee bell tent. I don’t know why but I liked the name. If you’re not local to Norfolk then you might not know that a Bishy Barnabee is a ladybird. This is now even more fitting for us as Erin really loves ladybirds now.

The bell tent was really beautiful and so much more than I was expecting it to be. To start with, the bed is a good double bed with electric blanket and there is a single futon bed as well. Bedding is provided (£10 charge in 2021) as well as 1 bath towel per person. We also got a kettle, water jug, tea/ coffee etc., fairy lights and bunting and a cool box (where ice blocks are available in the Honesty Shop). Things like this make a huge difference to us as a non driving family because there’s so much less that we had to take with us.

The Hive and Campfire Kitchen

Beckie has really thought of most things for guests. The Hive and Campfire Kitchen, the central part of the site, are where you can cook, eat and sit around the campfire. Each bell tent gets the use of a BBQ and a gas ring so there’s no fighting over who can cook where and when.

You also don’t need to worry about packing pots and pans as in your tent you’ll find a selection of plates, cutlery and cooking equipment for everyone. Each tent has their own items so it’s easy to wash up and put them back in your own tent so nothing gets mixed up. I think we had everything that we could have needed and didn’t feel like we’d missed anything. There is an undercover washing up area next to the family shower/ toilet with plenty of space to leave things to dry if you want to.

On site there is an honesty shop where you can buy a number of different things, should you need them or have forgotten something. This includes coals for the BBQs, firewood, breakfast cereal, marshmallows etc. We found this really useful as we hadn’t taken coals with us and only wanted enough for 1 night of cooking really. The honesty shop doesn’t have loads but it did have the things we might have needed.

I am the kind of person who usually only stays in hotels with en suites so the idea of camping and the facilities was a bit worrying for me. However, as a smaller site I didn’t have the fear of having to use communal showers shared with loads of people. Bumblebarn has a family/accessible sized toilet and shower, separate toilet and separate shower. The toilets are composting toilets, another thing that was completely new to me and I wasn’t sure about how that would go.

There was never a wait for the showers or the toilets and Beckie the owner was around a couple of times a day to clean things and empty the toilets. The composting toilets were actually really fine and none of us had an issue with them. In fact, I think Erin thought it was quite funny to use sawdust after she’d used the toilet.

What is there to do?

Bumblebarn is fantastic for families and I think we chose really well. At the back of the site is a super safe children’s play area and we felt like we could really let Erin go off on her own (and with the other children there) a bit more than we maybe would normally. There, she could play on swings, a climbing frame, balls, mud kitchen and a sandpit, just to name a few things.

One of the other amazing things about Bumblebarn is animals. Bumblebarn is home to alpacas, Shetland ponies, horses, chickens and ducks! You can feed the alpacas carrots and apples when you like and you can also book various animal experiences.

We chose to book a mini alpaca walk and a Shetland pony experience, which were £25 each. Beckie spoke to us a lot about the alpacas, told us what they liked and we got to feed them before taking them for a walk around the field. Erin really loved this part and it was lovely to let her do something that she wouldn’t have done otherwise. Erin’s favourite was the Shetland pony though, who she got to brush, stroke and clean as well as give some treats to. These experiences were definitely a highlight of our stay and something Erin will remember for a long time.

Most importantly… did we enjoy it?

I’ll be honest, glamping wasn’t at the top of my list of things to do but I wanted Erin to experience it. I was wrong to be so worried about it all really and we actually had the best time. The 3 other tents were occupied by a group and while that could have been a bit intimidating, it wasn’t. They were very friendly, included us at various different times and we were able to sit around the fire with them without feeling out of place.

Bumblebarn has this relaxed, chilled out feel to it but with a real sense of community at the same time. We really loved our weekend there and Erin really didn’t want to leave on Monday morning when it came time to go home. If you’re looking for somewhere for an amazing experience in a bell tent in Norfolk then really consider a stay at Bumblebarn. 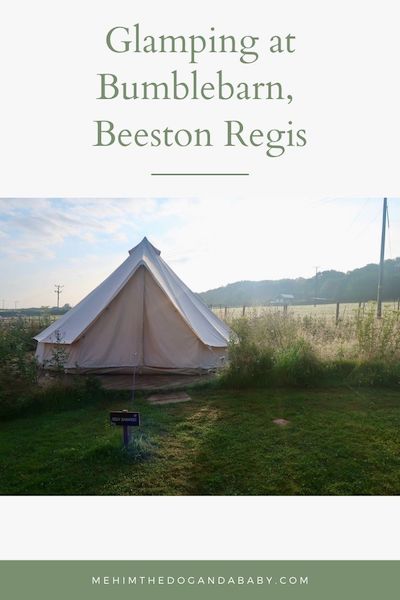