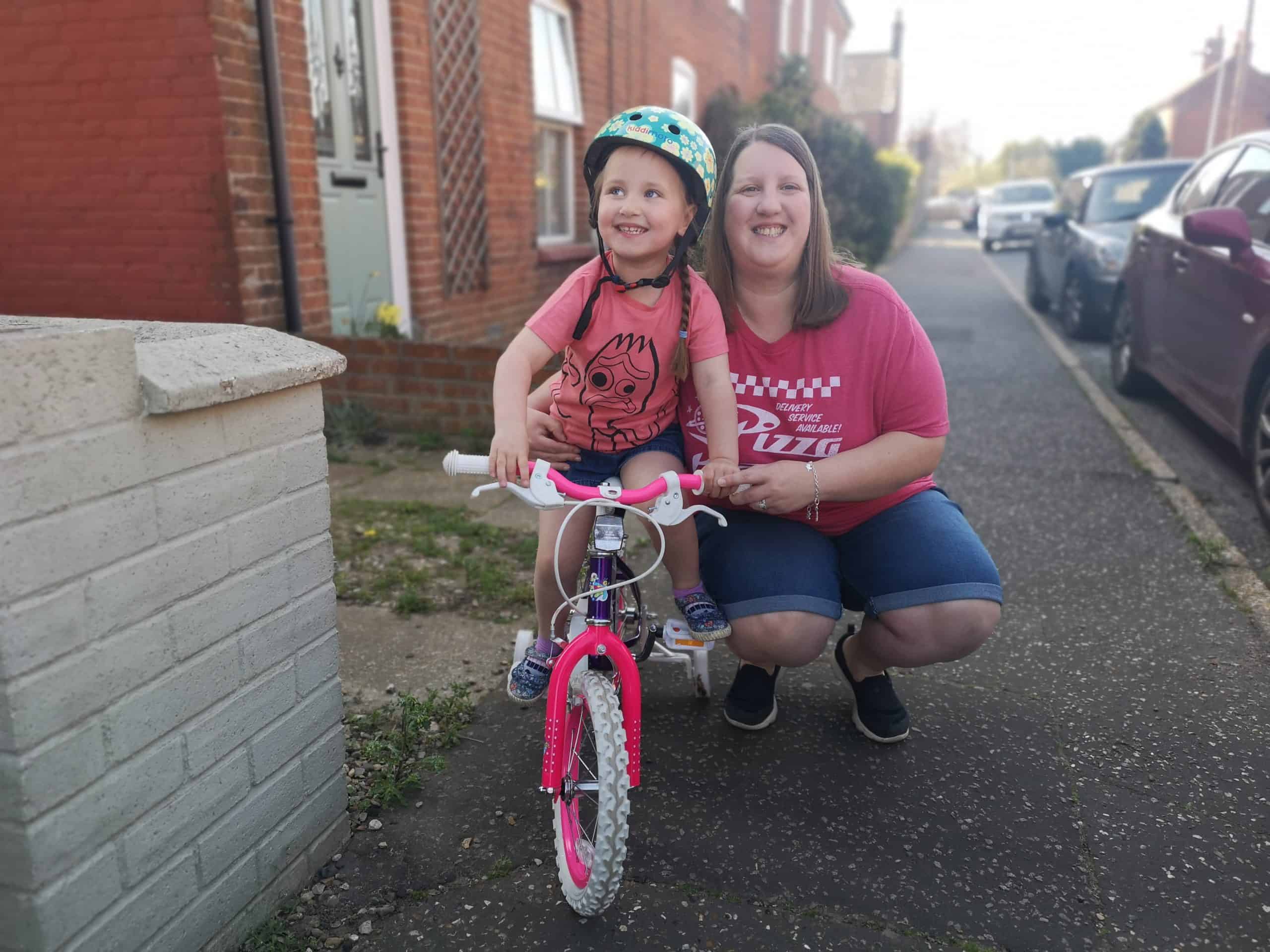 I think we got Erin her first bike when she was around the age of two. It was a red toddlebike and she was so exited when she saw it. I remember her spending hours playing on it in the garden but before long she was starting to outgrow it. So, we upgraded her to a balance bike from Kiddimoto. This one was a bit trickier and Erin struggled to get the hang of it for a little while. However, now aged 4 the bike is too small for her although she still loves it and is super good at riding it.

Now that we have a bit of time on our hands we thought it was about time we got Erin a bigger bike, her first pedal bike. Having no experience of this though we were a bit stuck when it came to knowing what to look for. With most shops closed and not wanting to get unnecessary deliveries we also had very few options of where we could shop. Luckily, we live across the road from Sainsbury’s where they have an Argos inside so we were able to combine a regular shop with picking up something we ordered online. 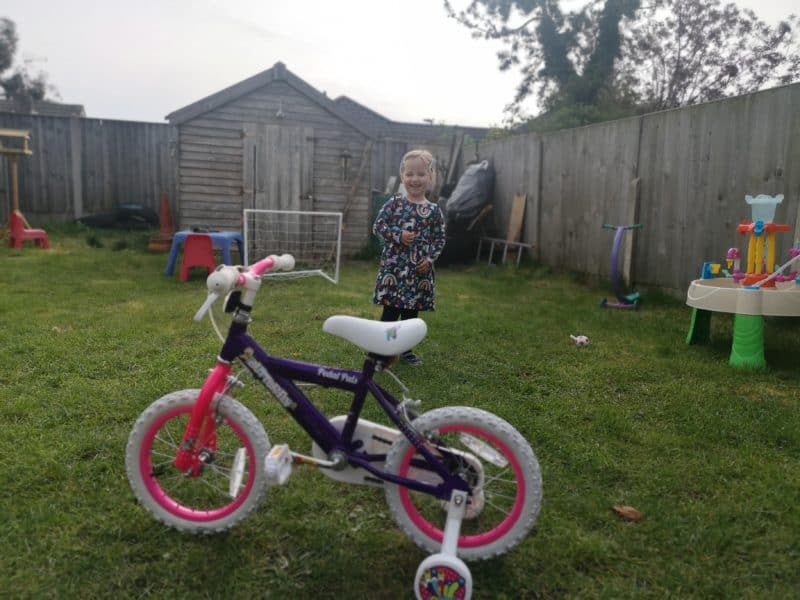 So before we started looking online for a bike for Erin all I knew (more like thought) was that it needed to be a 14 inch bike. From what I had seen this size seemed right for children age 4-6. There was options for children aged 3-5 but as Erin is already 4 I figured she might grow out of it too quickly. Argos had a few options available ranging from around £70 and going upwards to well over £150.

In the end, we chose the cheapest option. I think a lot of the differences seemed to be for things like added baskets, bells or having a very popular cartoon as a design. We didn’t want any of these extras, we just wanted something that Erin could use to learn on. We chose a bike with stabilisers because although she’d had a balance bike for quite a while I didn’t think she should go straight to learning without them. It took John a couple of hours to put the bike together and a few adjustments later it was all ready for Erin! 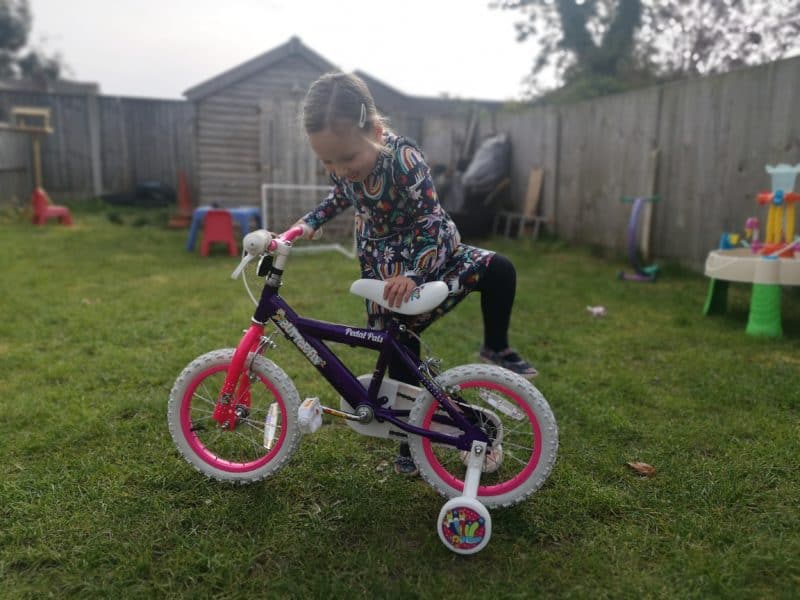 As excited as Erin was about the bike when she saw it, the first day wasn’t what I thought it would be. We had a practise down our street but it didn’t last very long. Erin was wobbly, the stabilisers weren’t quite right and the seat wasn’t high enough. Not only that but Erin was really quite scared. She had fallen off and was then scared about hurting herself if she did it again. Instead of pushing her to keep trying, we stopped for the day and encouraged Erin to try again for a little bit the next day. 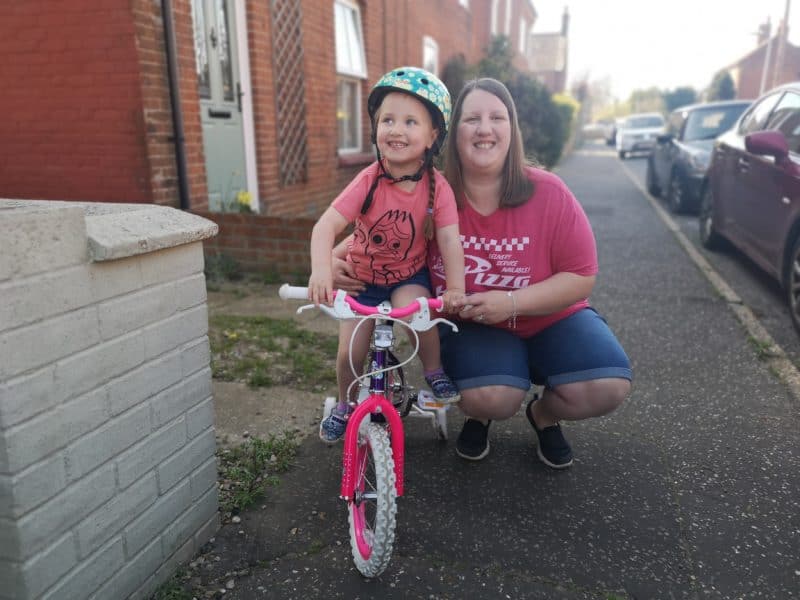 On day two Erin and her Dad went out down the street again for a practise. Not long after they had gone out Erin came in to get me to go out and watch her. I don’t know what happened but she’d pretty much mastered it. It really seemed like she had woken up and decided she was able to ride the bike. Since then she has been out every single day wanting to go further and faster. 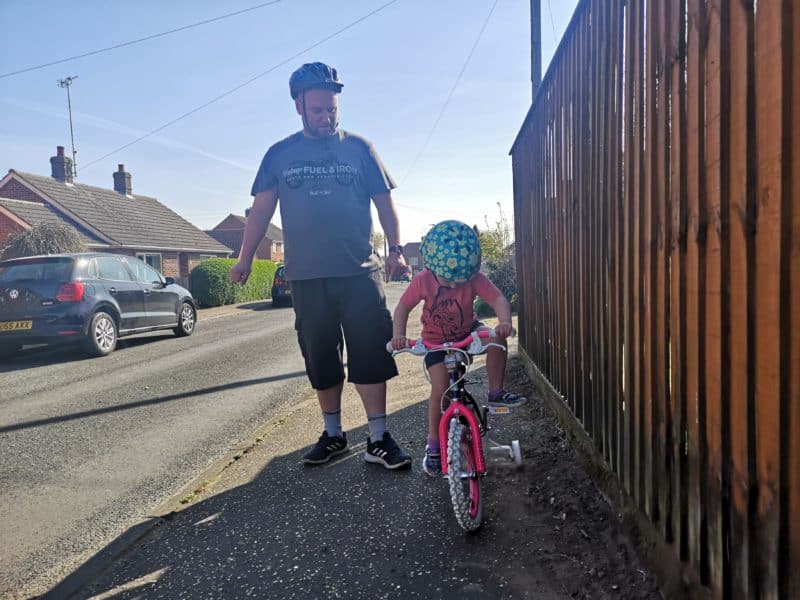 Although I don’t really know a lot about choosing the first bike for your child I do think it’s important to look at what’s available. We looked at a fair few options before deciding on the one we bought. It can be hard when you’ve never bought a pedal bike before (especially as someone who can’t ride a bike) but what we found was that the more expensive the bike, the more distractions it came with. I do think that we would get Erin a prettier bike, something she might like a bit more next time but for now, getting something she could really learn on was the most important thing. 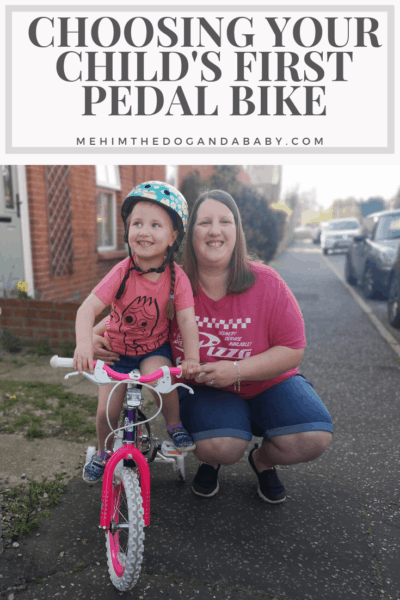