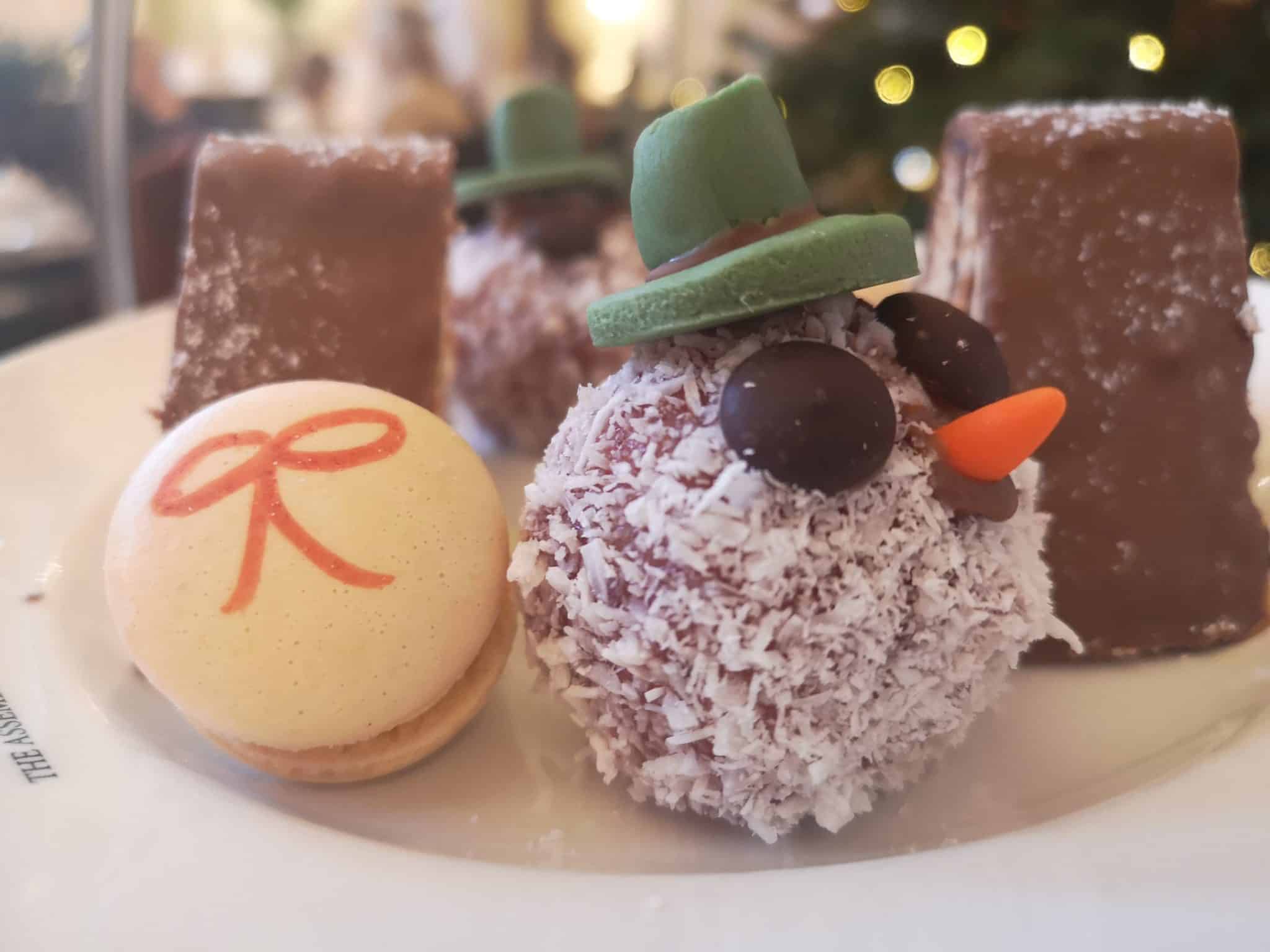 Once a month I go for lunch with a friend and we generally pick somewhere I have never been before. For our meal in December we wanted something really festive but no restaurant menu really stood out to us. My friend had been to The Assembly House before and suggested it as an option as they had a festive afternoon tea menu. At £22.95 (or £45 for two) it wasn’t a cheap option but we both wanted something special for a pre-Christmas treat. 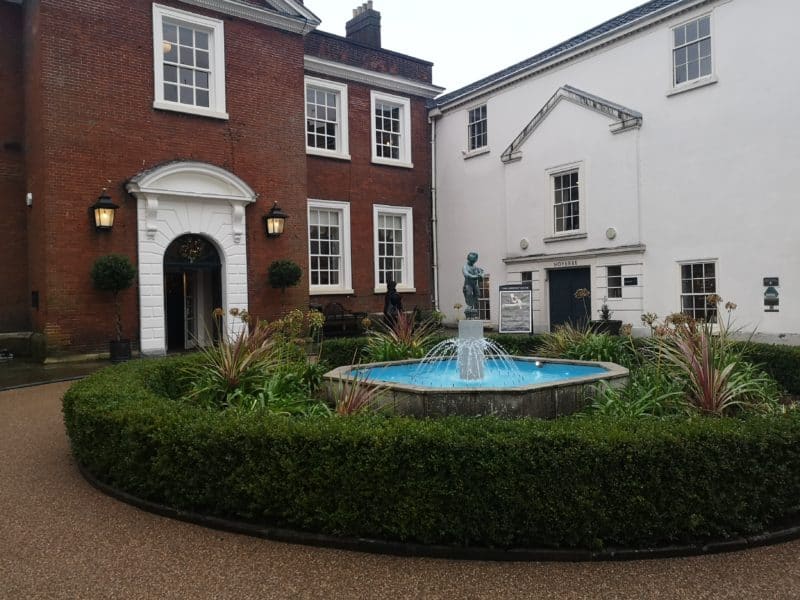 The Assembly House is an absolutely stunning Georgian venue in the centre of Norwich. I have walked past it so many times, thinking about how beautiful it looked but hadn’t ever been in. From my 6 years of living in Norfolk, I have heard nothing but good things about The Assembly House so I was really very excited about afternoon tea. 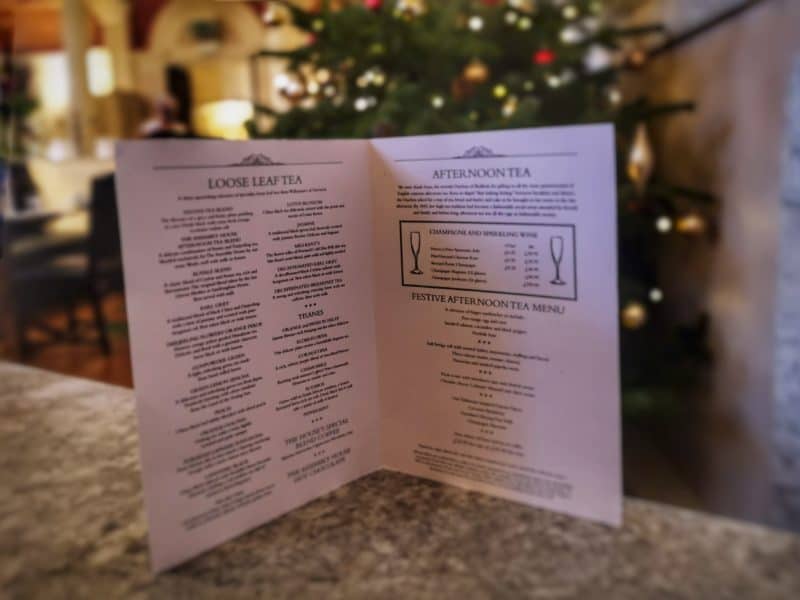 We arrived shortly before midday and had a large choice of tables in one of the dining rooms. We chose to sit right next to the Christmas tree as we had my friend’s 6 month old with us and we thought it was be nice for some photos. We had a pushchair with us and also needed a high chair but nothing was too much trouble and we were made to feel really comfortable. 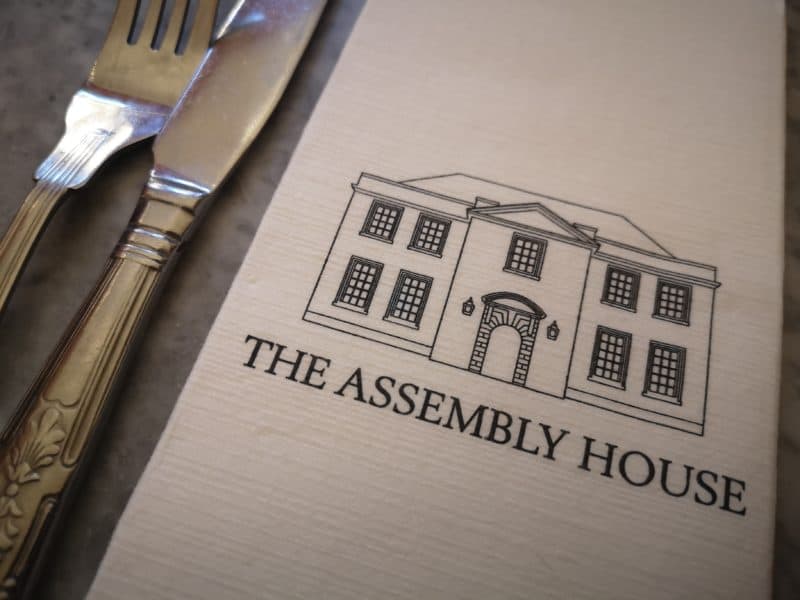 My friend and I had a few alterations made to the festive afternoon tea menu, due to personal taste of food and although I made thema ware of this when booking on the phone I did mention it again when we ordered just to make sure it was all okay. Again, nothing was too much trouble and we were asked questions to make sure we got what we wanted. 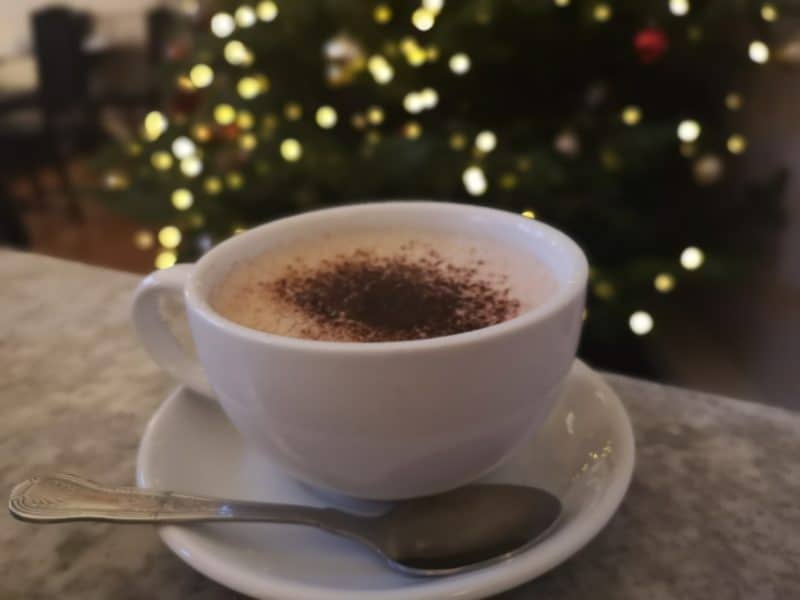 Although an ‘afternoon tea’ I don’t actually drink tea so I opted for a hot chocolate. The top of it was like a really frothy aero bar and it was truly delicious. Unfortunately, when I got to the end of the drink I was shocked as I ended up with a small piece of plastic in my mouth. I initially panicked and thought a tooth or filling had fallen out. Our server came over quickly and was really very shocked and couldn’t apologise enough. I was made another drink quickly and I was happy with how the situation was handled. It certainly didn’t put me off going forward with our food. 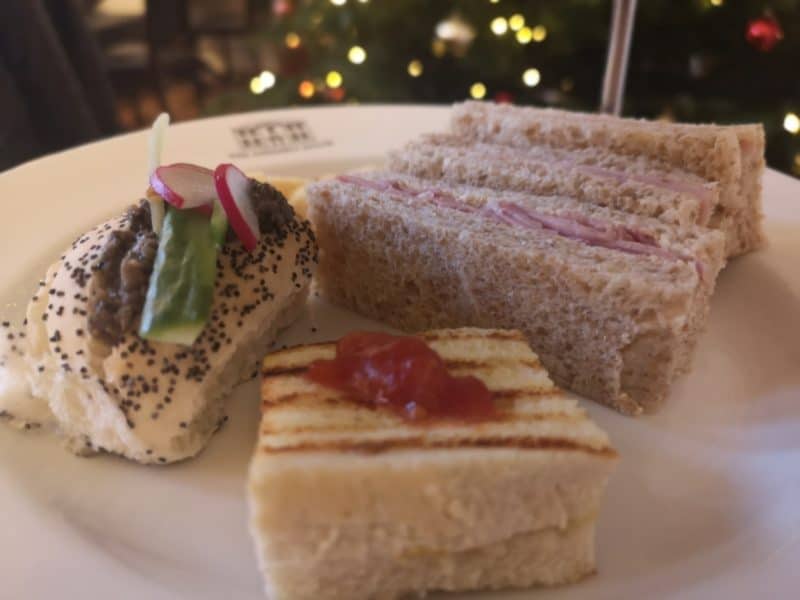 The festive afternoon tea came with a selection of sandwiches (we chose plain ham), a toasted cheese sandwich with cranberry chutney and would have come with a turkey brioche. However, we asked to not have this and we were made something with mushrooms instead. We also had a cheese and paprika straw. Although a ham sandwich sounds pretty plain, this was really well done. The ham was really good quality and there was no fat at all so I was very happy. The three cheese toastie was especially nice and the chutney went really well with it. 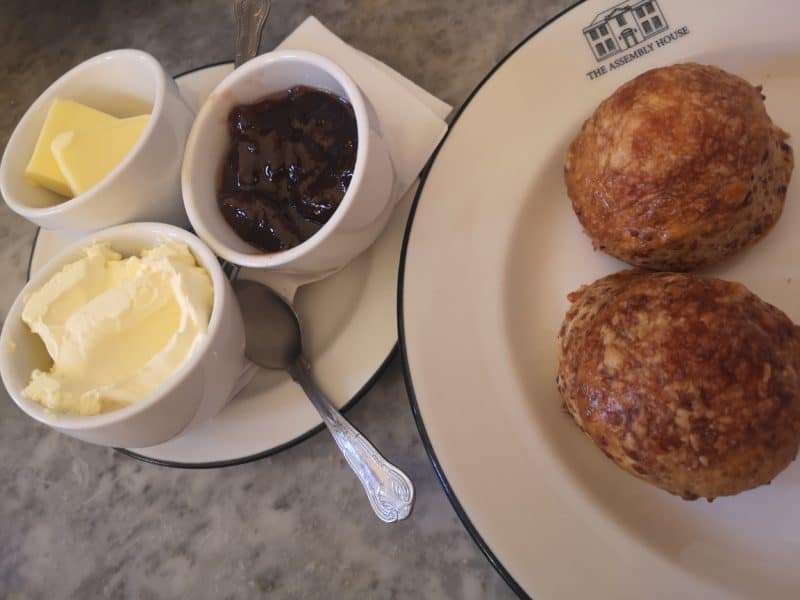 We chose to then have the cheddar cheese, Colman’s Mustard and chive scones to break up our courses. I haven’t had a scone like this before but it was a lot better than I had expected it to be. I’m usually more of a sweet scone kind of person but I was very impressed with this one. I lathered it with butter and I think that also added to how good it was. We did also have fruit scones but we saved these for the very end. Unlike with a lot of places, The Assembly House bring the scones out separately so they are warm when you get them and this was a really nice touch. 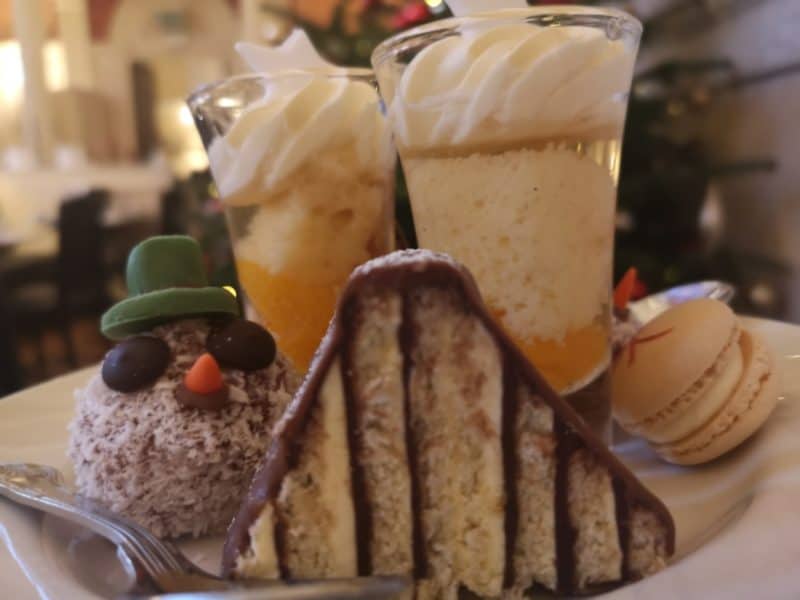 Next it was time for the dessert section of the afternoon tea and I feel that this is where The Assembly House really excel. This layer included a Toblerone-inspired Gateau Opera, Coconut Madeleine, Grandma’s Boxing Day Trifle and a Champagne Macaron. 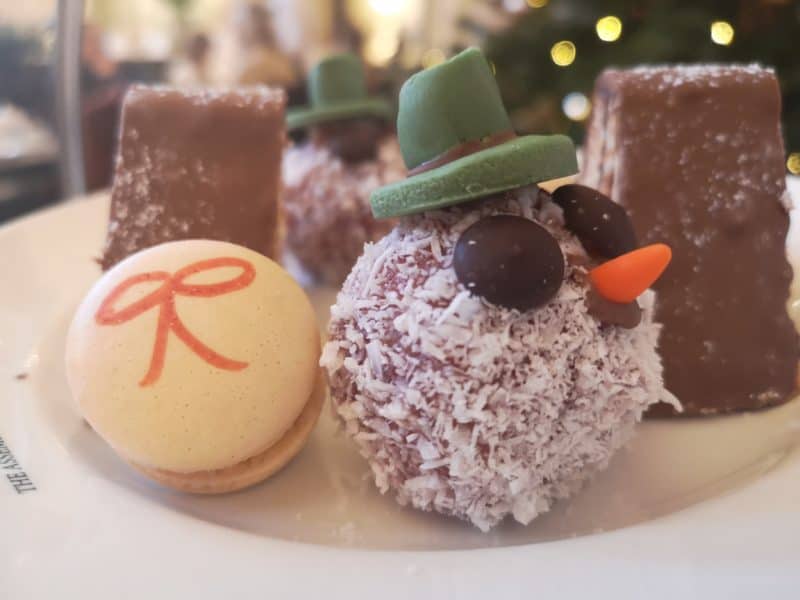 Trifle is not something I would ever pick by this one was just fabulous. I loved the sweet mandarin and the smooth texture of the whole thing. It was refreshing and different and I’m glad we started with this after the scone. Next was the coconut Madeline but I honestly wasn’t a big fan of this. It was okay but a bit too dense for my liking. The Toblerone-inspired Gateau Opera was the star of the whole afternoon tea though and after 1 bite I was in heaven. I could have eaten this 10 times over I think.

I know The Assembly House has a good reputation but until you go there yourself you won’t really understand why. This was hands down my most favourite afternoon tea and I’m already looking forward to booking again at some point next year. If you haven’t been yet, you need to change that!

If you’re looking to treat yourself, or a loved one, to a delicious meal out then be sure to find the best Afternoon Tea or Cream Tea near you. 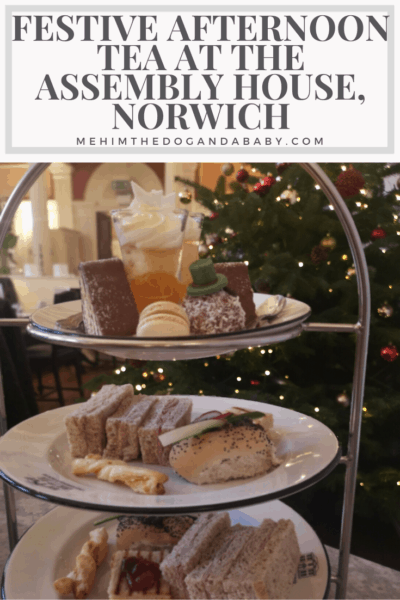 11 thoughts on “Festive Afternoon Tea At The Assembly House, Norwich”