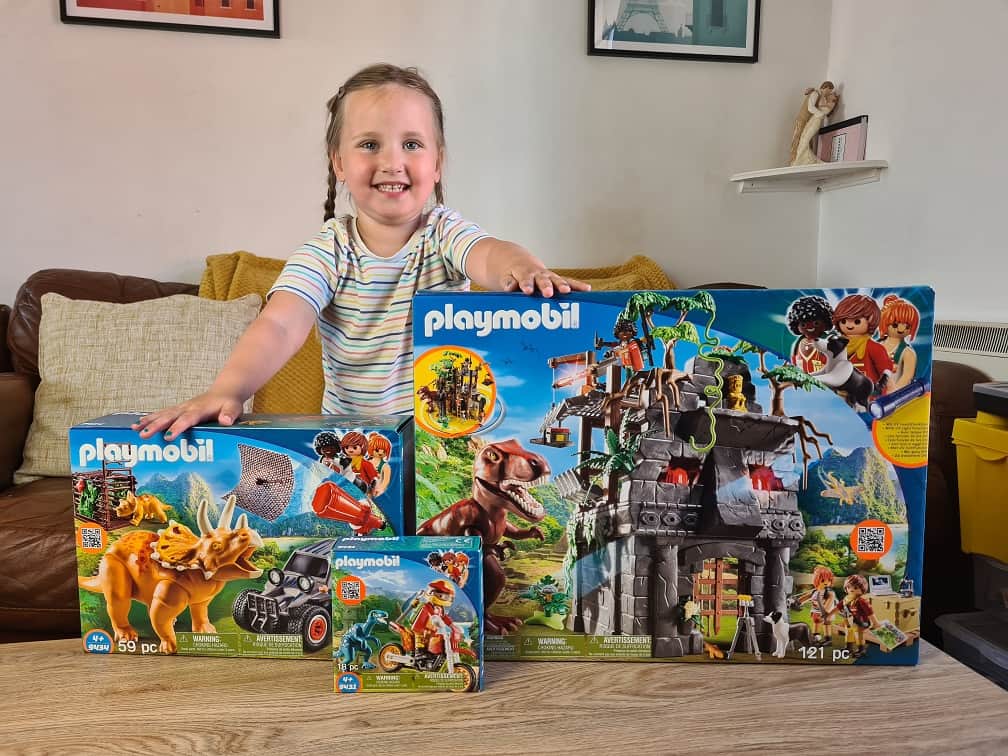 Over the last few months Erin really seems to have changed how she plays and what she wants to play with. All of a sudden she seems a lot more grown up and has shown a really like for Playmobil sets. We were recently sent some fantastic exclusive sets from the Playmobil Dinos range.

We started off with the smaller of the three sets, the Playmobil Dinos Motorcross with Raptor. Up until this point, we hadn’t put together any big Playmobil sets so we wanted to start off with something quite simple. As a small set, this one would make a really great gift or maybe something to add to a bigger collection. This one has a RRP of £9. 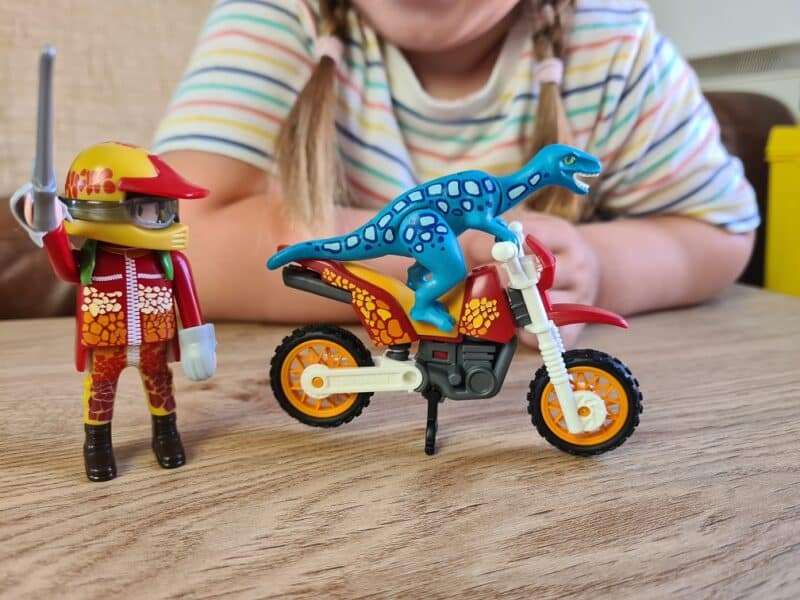 This set consists of a figure with accessories such as sword, backpack and helmet with glasses, a motorbike and a raptor! Erin was able to put quite a lot of this one together will a little bit of help from us, telling her which pieces to put where. The raptor doesn’t need any assembly though so there is something to play with immediately out of the box. 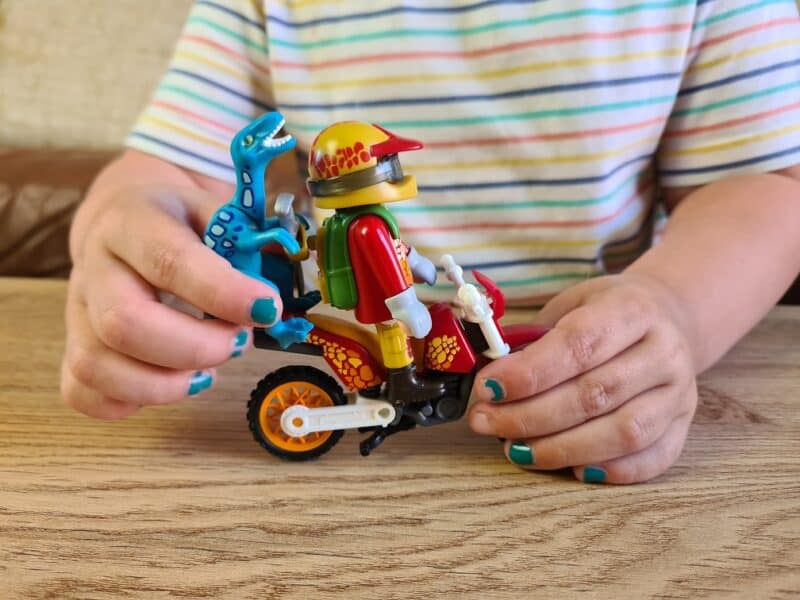 I was really quite surprised at how many different ways Erin thought of to play with just these pieces. The backpack and helmet can be taken off quite easily so Erin was able to change up what was happening while she was playing and she really loved chasing the raptor around trying to catch it. 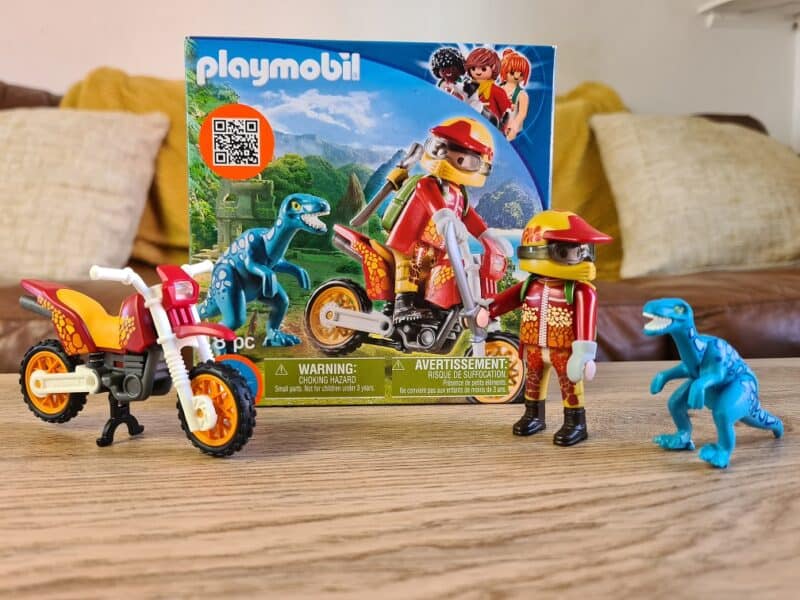 The second set is more of a medium size, with a RRP of £33. The Playmobil Dinos Enemy Quad with Triceratops comes with one character, a big and small triceratops, a cage and a car with a gun that shoots out a net. For the price compared to the smaller set you really get a lot more for your money. Again, the dinosaurs come as they should be so they’re ready to play with out of the box. 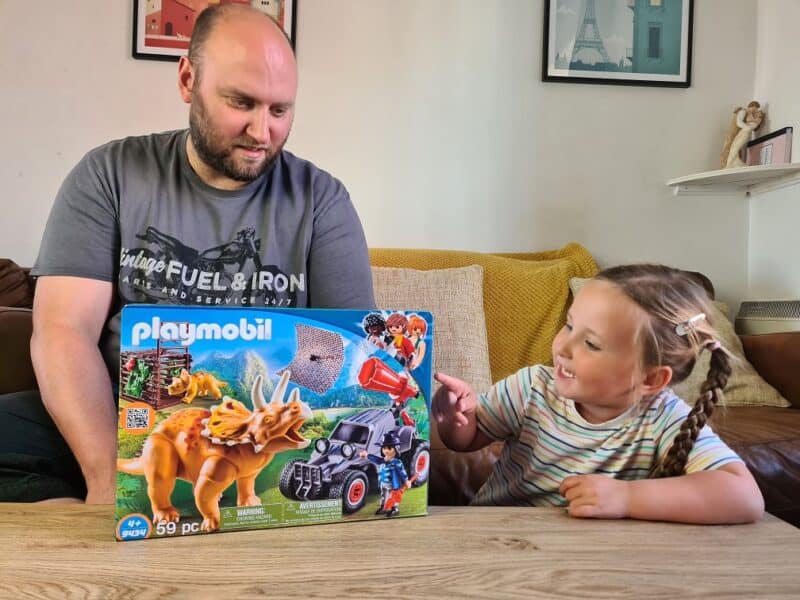 This set was a little bit trickier for Erin to put together. It says it’s for children age 4+ and while she could do some bits on her own, like the wheels, some bits were a bit too fiddly for her. Some of the harder bits took both me and John some time to figure out, such as the gun on the car that shoots out the net. 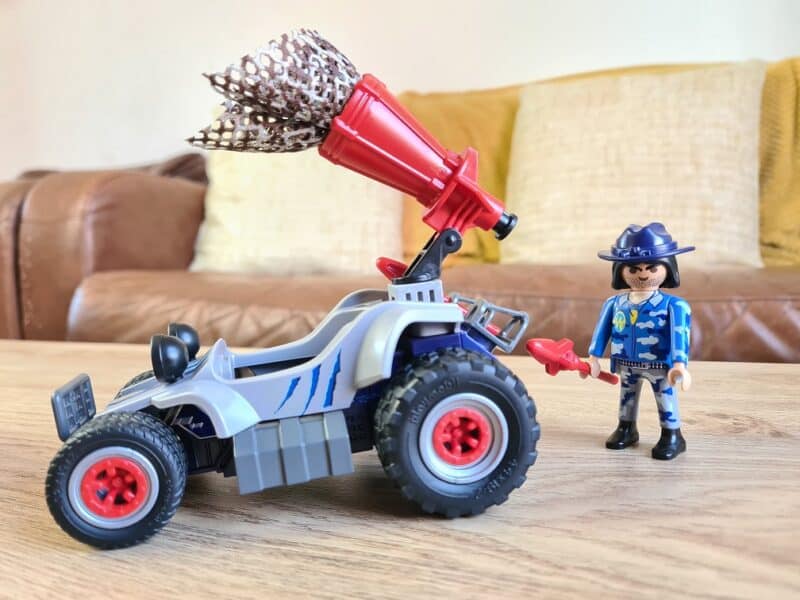 Having the big gun on the car that shoots out the net is a really cool feature and Erin couldn’t wait to see this in action. It is a little bit tricky to get the hang of but once you know how, it’s can be done easily and quickly each time. The car is also really cool on its own. The character that you get with the set can sit inside and the top can be taken on and off. There is space on the back of the car to hold two spears (I think) but the character can also hold these when he’s out of the car. 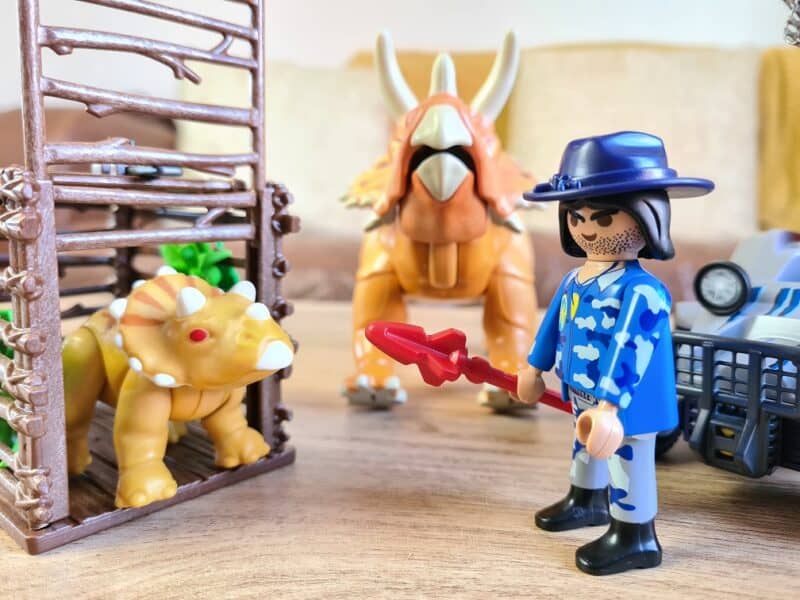 I think the big favourite with this set was the cage. The cage is big enough to trap the smaller triceratops (as well as the raptor from the first set) and it has leafy accessories to add on to the sides so the dinosaur has something to eat! The door can be opened and closed and then kept up if you want to.

Last up we have the big one, the Playmobil Dinos Hidden Temple with T-Rex set. This set has a RRP of £50 so something like this is what we would maybe buy Erin for her birthday or as a Christmas present. Again, this one is suitable for age 4+ and it comes with a whopping 121 pieces! 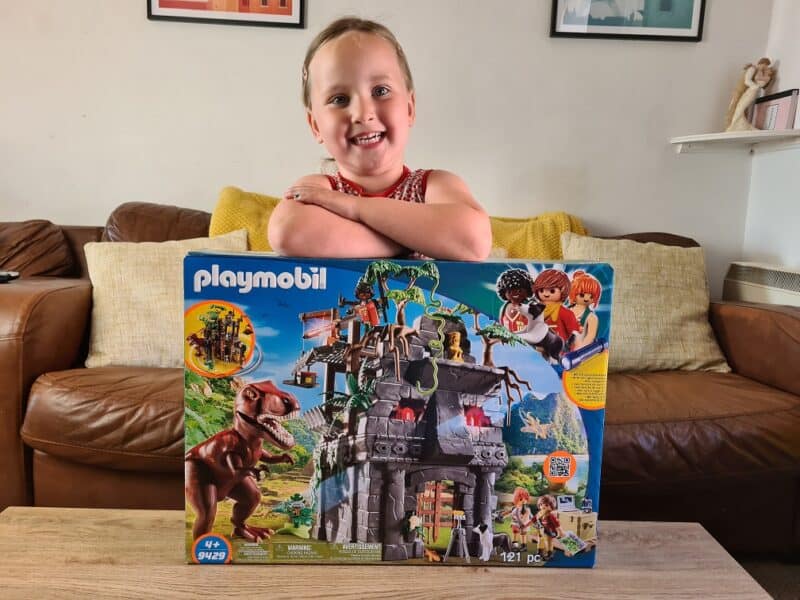 Inside the box comes quite a few different bags with all of the pieces in them. Sadly, none of them are numbered and there doesn’t seem to be any reason why some pieces are in with others. I was hoping each bag was a different section of the set but you do have to open them all up at once to be able to put it together. It would have been a lot easier to either have all of the pieces in one bag or to section them up a bit better. 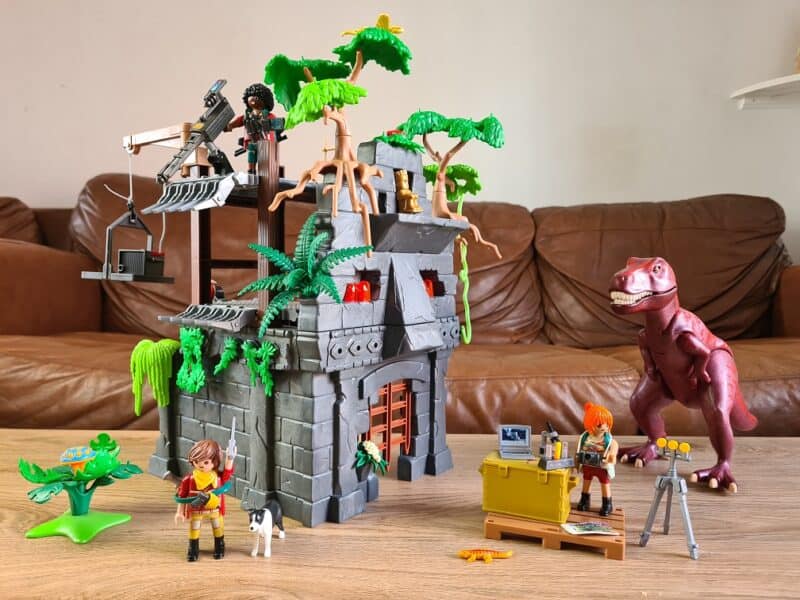 John and I ended up putting most of this one together rather than Erin. There was quite a few fiddly bits such as the rope for the lift and all of the pieces laid out on the table was a bit overwhelming for her. While we worked on the main structure of the Hidden Temple Erin was able to work out some of the smaller bits like the characters and putting the chests and plants together. 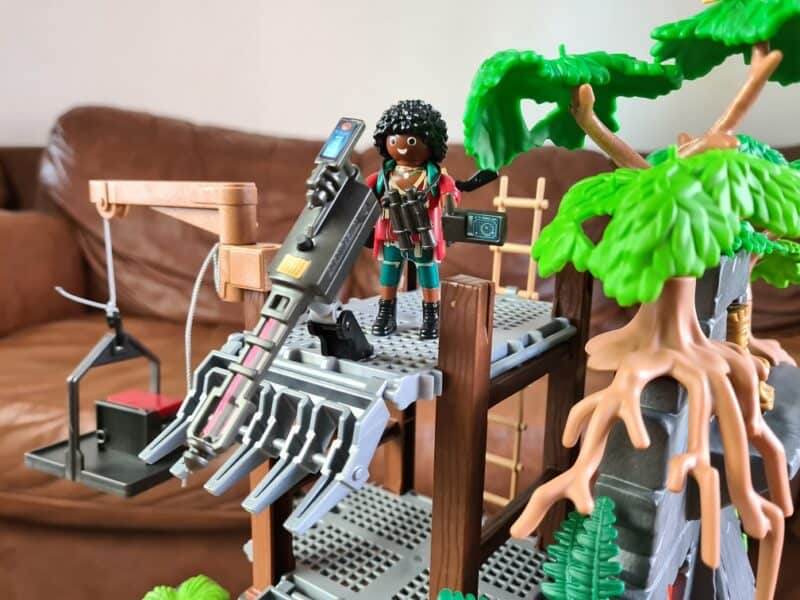 This play set has lots of different areas and there is a lot to do! There is a climbable ladder with two levels for the characters to stand on. The top level includes a gun (with working lights) and a lift with a rope to pull it up and down. The trees and plants growing up the side of the temple are a nice added touch too, making it feel like it has been abandoned for quite some time. 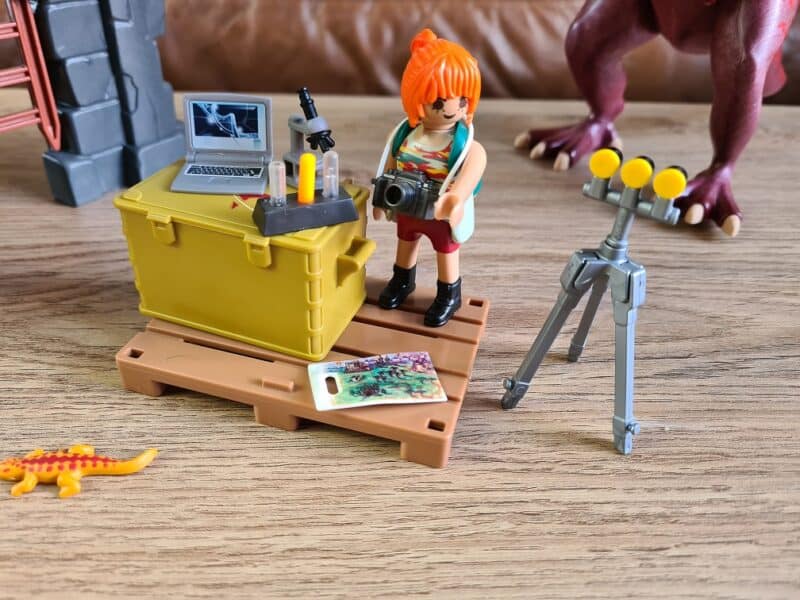 The Hidden Temple set has SO much going for it and it’s definitely my favourite out of the three we were sent. To start with, you get three very different characters, each with interchangeable accessories. There’s a camera, binoculars, science equipment and a laptop! I thought it was really cool that the set included a group of explorers along with some really cool stuff for them use. 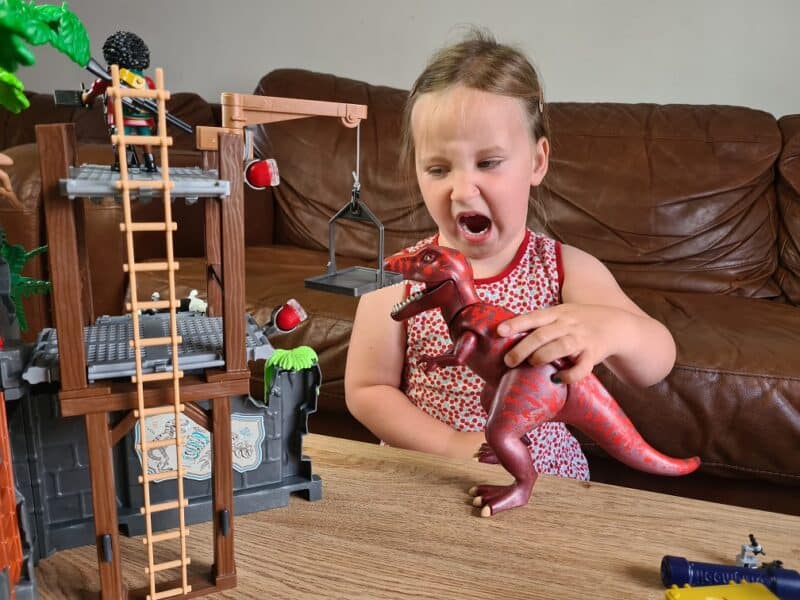 The set wouldn’t be complete without a cool dinosaur to try to make things difficult for the explorers and with this one you get a huge T-Rex! If you added the dinosaurs from other sets too the poor explorers would definitely need all of the weapons that they come with. At first, I thought the weapons were a bit much in this set with there being multiple guns and swords but they can easily be taken out if you want to.

We are so impressed with the Playmobil Dinos range and Erin has played with them so much since we got them. It’s great that you can add multiple sets together to extend play and to help encourage thinking of new ways to play. 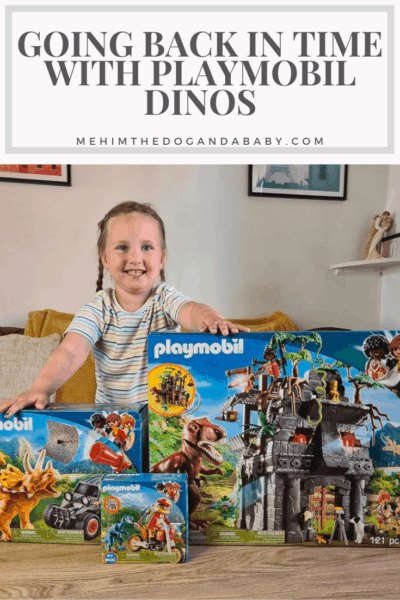 5 thoughts on “Going Back In Time With Playmobil Dinos”