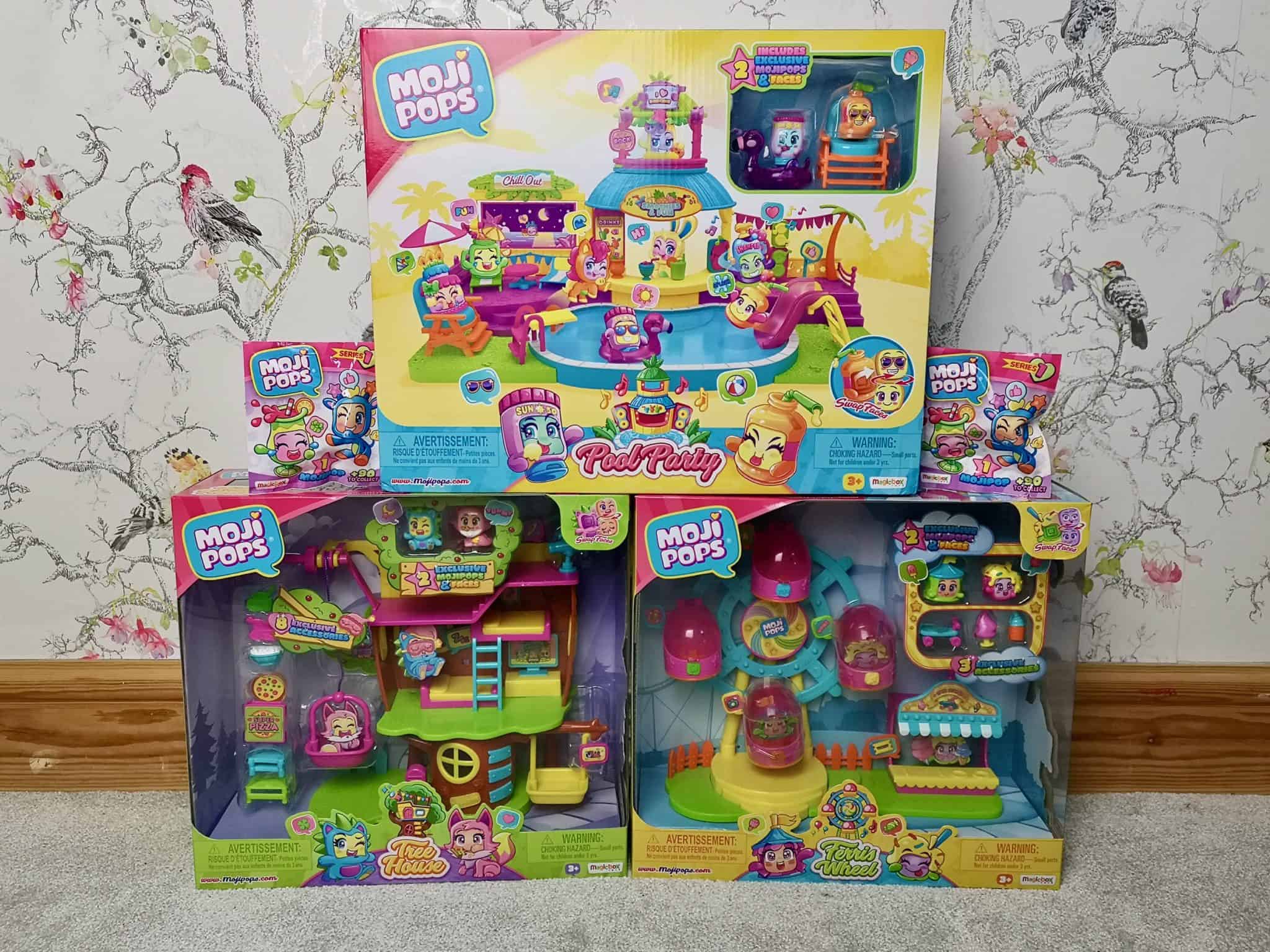 I remember the first time Erin discovered collectable toys; it was probably around 2 years ago now. She loved the idea of playing with toys where she could add to the collection over time, letting her change how she played as well. Now, turning 4 in just a few weeks, Erin still loves the same kinds of toys. She was recently sent a few different MojiPops sets and blind bags to play with!

If you haven’t heard of MojiPops before then they are collectable toys, with play sets to go with them! The characters have changeable faces, which pop out and can then be turned over easily. You can, of course, keep these for the character they came with but you can also switch around the faces and give them to other characters too if you like! 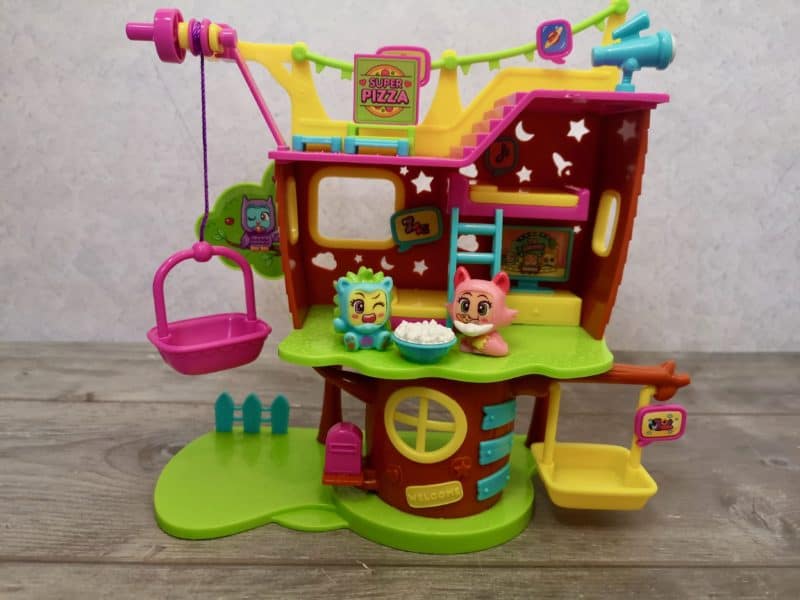 The first set that Erin received was the MojiPops Tree House which comes with 2 exclusive MojiPops and 8 exclusive accessories. Even before opening the box I could see just how much there was to do and I knee that Erin would love it. Erin got straight in there to discover all of the different areas to discover what it all did. 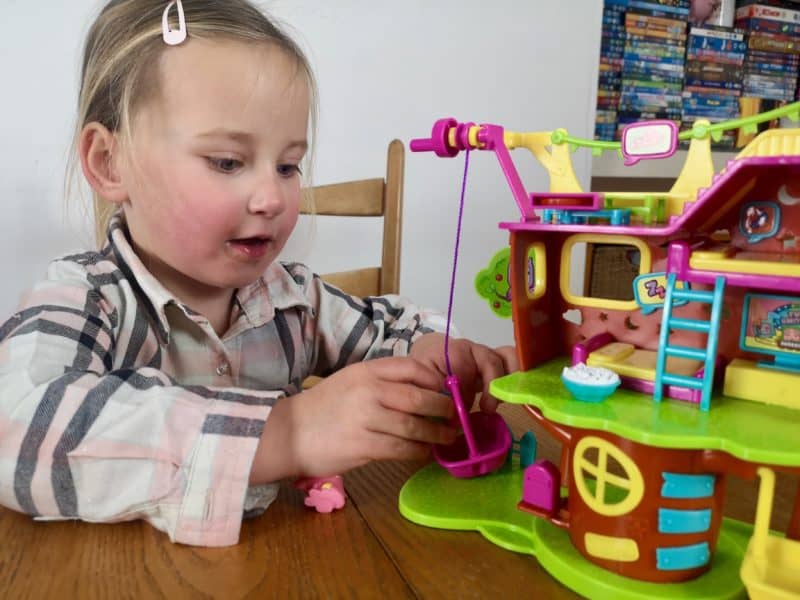 Erin was straight in there with the swing and basket that can go all the way from the floor right up to the top of the tree house. The basket can be wound up and down to move things such as the MojiPops characters, the pizza that comes with the set or even the popcorn that comes with it as well! It’s such a fun aspect of the play set and Erin has already thought of lots of different ways to play with it. 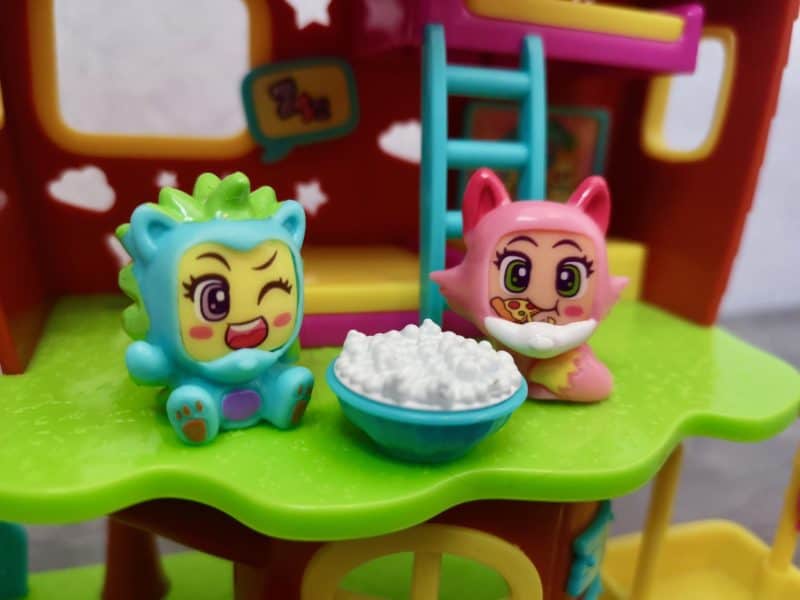 The MojiPops are really fun and I love that you get 2 with the play set. These are also exclusive MojiPops so you won’t be able to get them in the blind bags. One from this set has a pizza slice in their mouth, which goes well with the pizza accessory that comes with it. Being able to change the faces means that you can change how the set is played with or what the characters are doing. 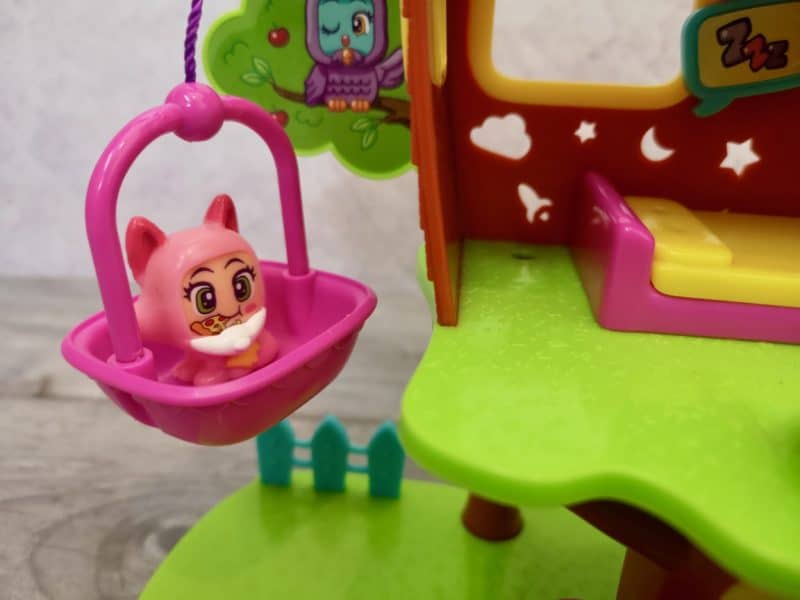 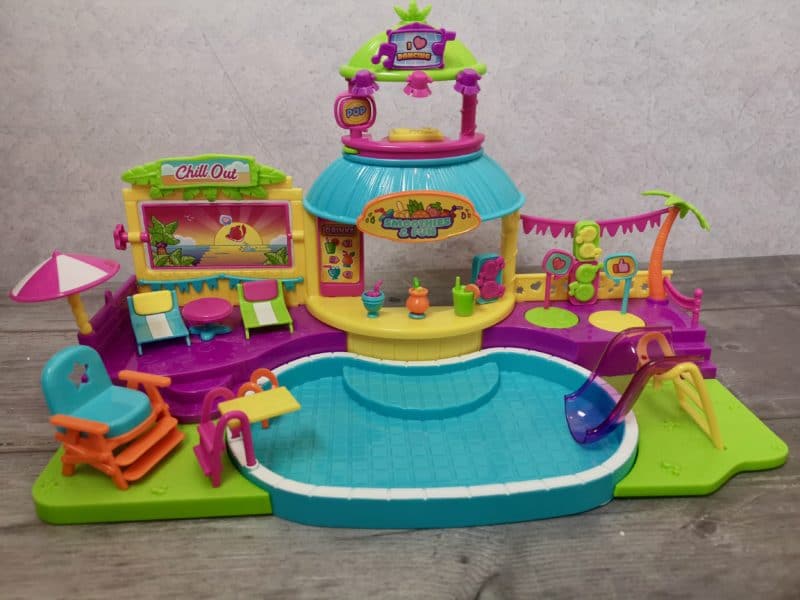 The MojiPops Pool Party is my personal favourite out of the sets that Erin was sent. I think this might be due to the size more than anything, as there is a lot more to it than the other sets. As with the other sets, this one comes with 2 exclusive MojiPops as well as exclusive accessories. 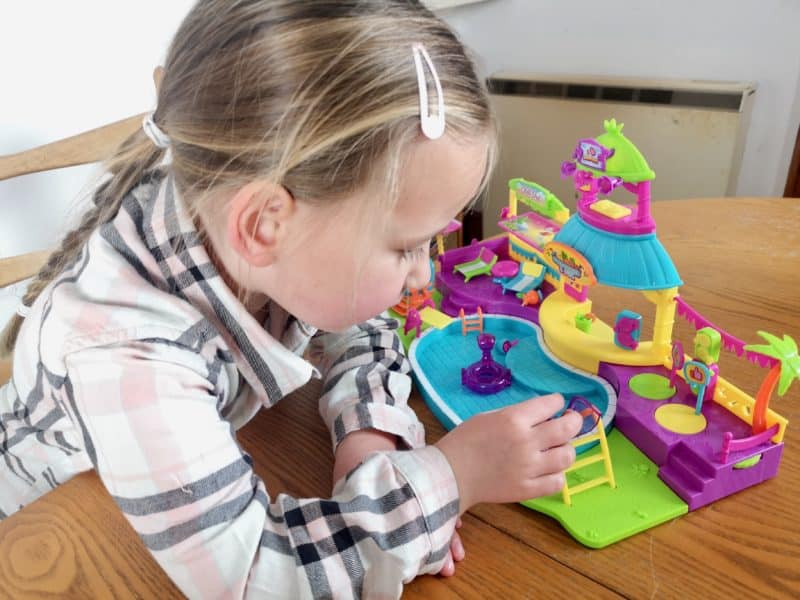 The MojiPops Pool Party has quite a few different areas to plat with, such as the pool, the drinks bar and even a lifeguard’s chair to make sure everyone is safe and following the pool rules! This set comes with a lot of accessories, such as the sun loungers and table, pool inflatable and delicious looking drinks! I really feel like you get a lot for your money with this one. 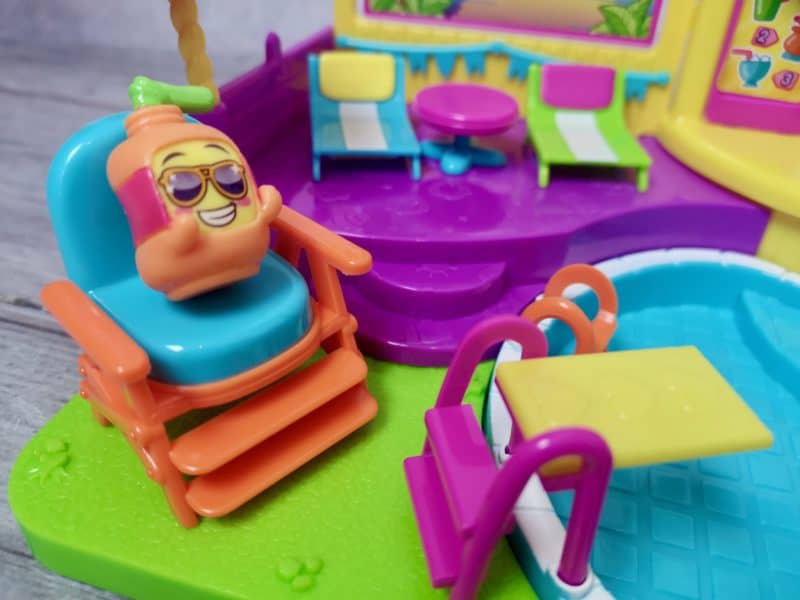 The MojiPops characters that come with the set have really great faces! Nothing says fun at the pool by someone chilling out with sunglasses on or being happy while having a swim or a dance at the disco! I like that as Erin has other MojiPops sets she can invite the other characters along for a party. This set really benefits from having other MojiPops to play with as well to make the most of each area. 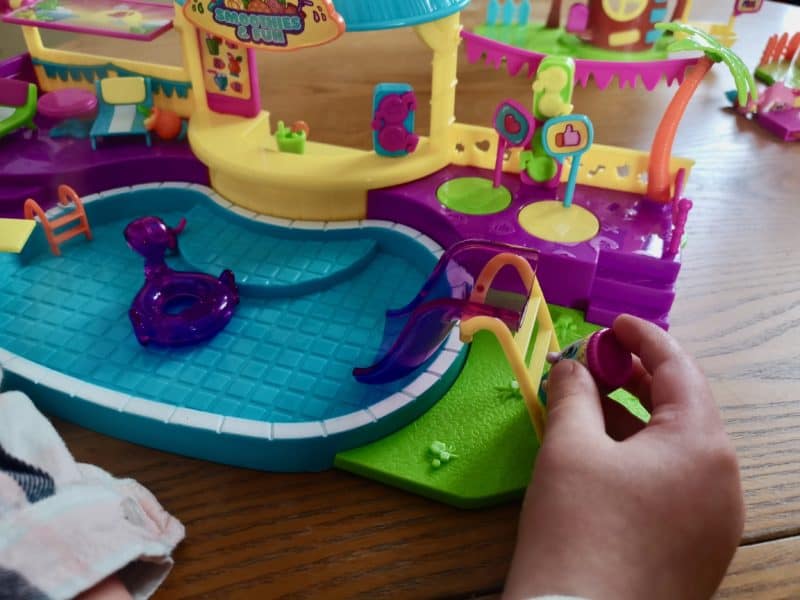 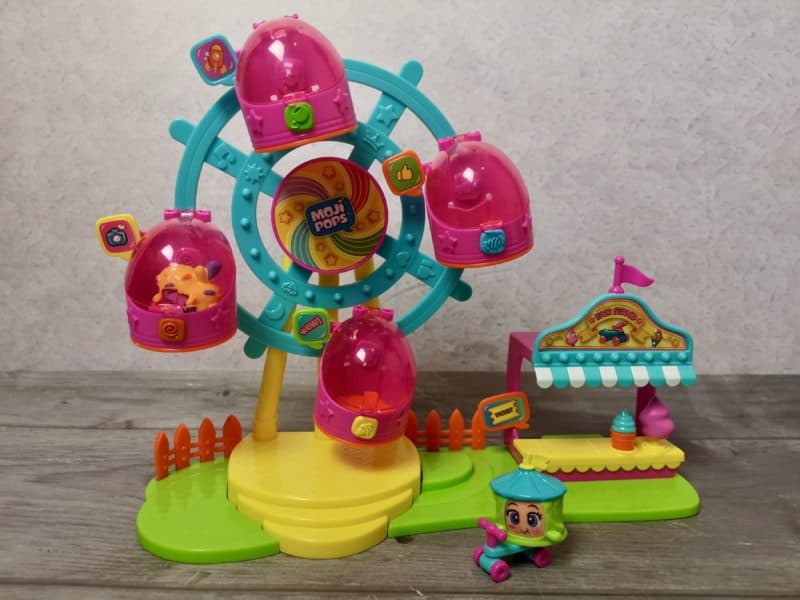 The final set that Erin was sent was the MojiPops Ferris Wheel and this one comes with another 2 exclusive MojiPops characters and 3 exclusive accessories. This is the smaller of the 3 sets with not quite as many different things to do or areas to play with. 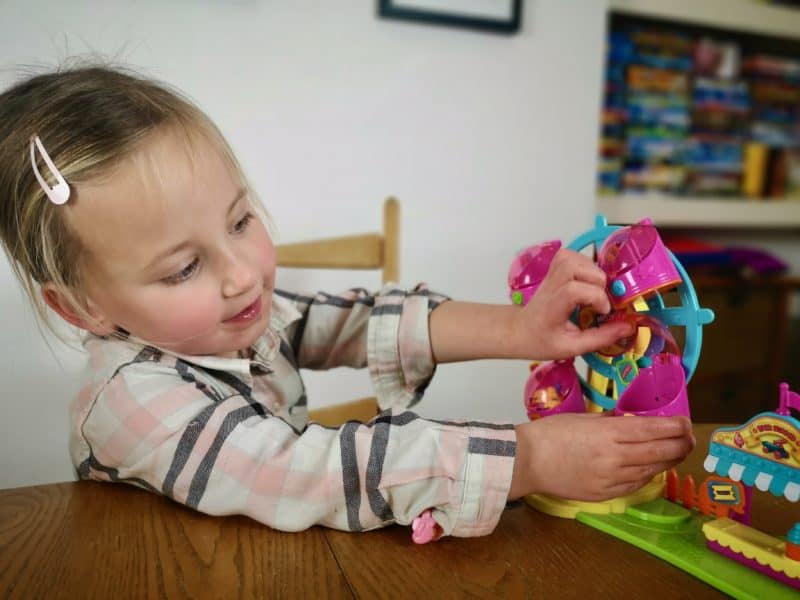 Even though this is one of the smaller sets, Erin loved it! She is a bit obsessed with wanting to go on the London Eye at the moment so she pretended that was what the ferris wheel was and where it was. Each of the 4 ferris wheel compartments holds 1 of the MojiPops (2 if they are smaller or thinner) and they can be clicked shut. Erin really liked making sure friends could go together or that one of their MojiPops friends was waiting for them to get off at the bottom. 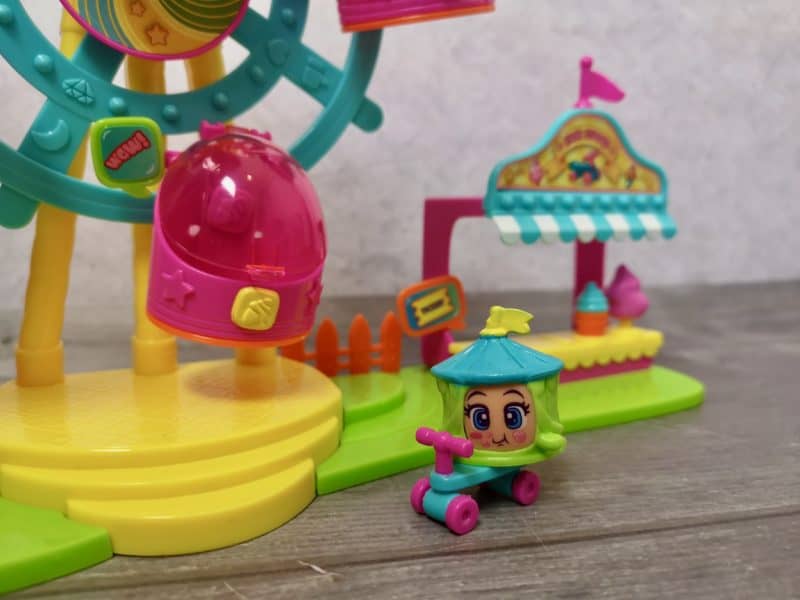 The MojiPops Ferris Wheel also has a small ice cream stall to one side and one of the accessories is a skateboard. Although a small accessory compared with what you get in the other sets, Erin played with this one a lot. She took her MojiPops friends on exciting rides around the fun fair while they were waiting for a turn on the ferris wheel. 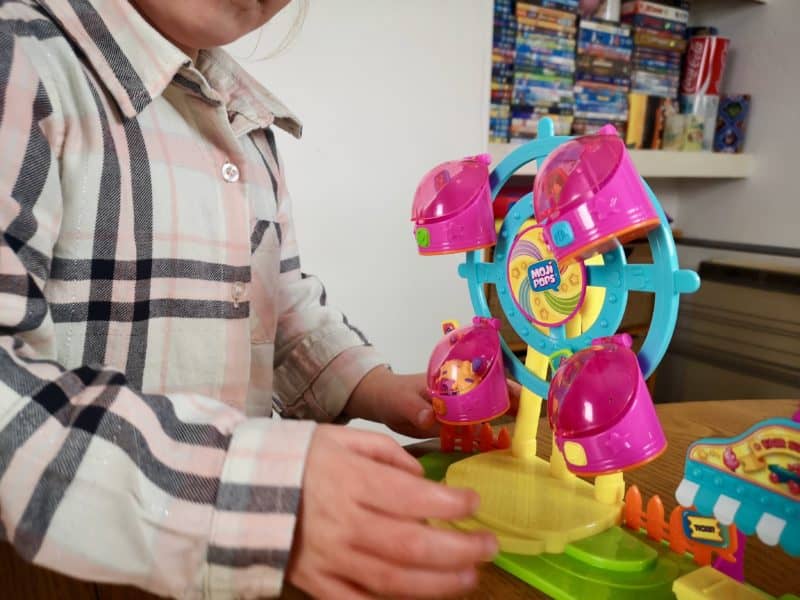 The MojiPops play sets are really well thought out and there is a lot to encourage imaginative play. Not only are there lots of different aspects to play with but the MojiPops characters themselves enable children to talk about emotions, change the way they play and to come up with new situations depending on their mood. I haven’t seen any toy like this before and Erin really liked talking about why the characters had a certain face and why they were feeling a certain way.

An MojiPops play set would make a really fun Christmas gift this year and it won’t break the bank. Children can also add to their collection with the MojiPops blind bags that could be purchased with pocket money. 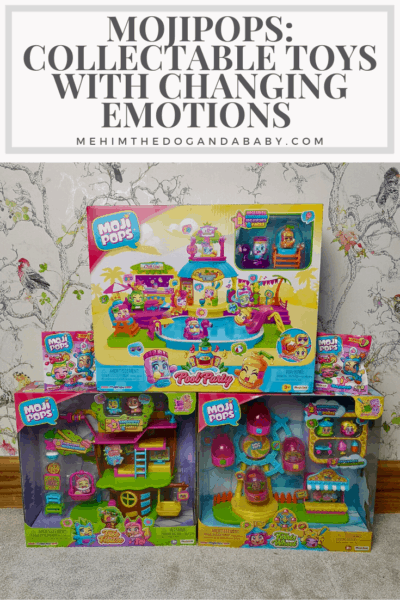