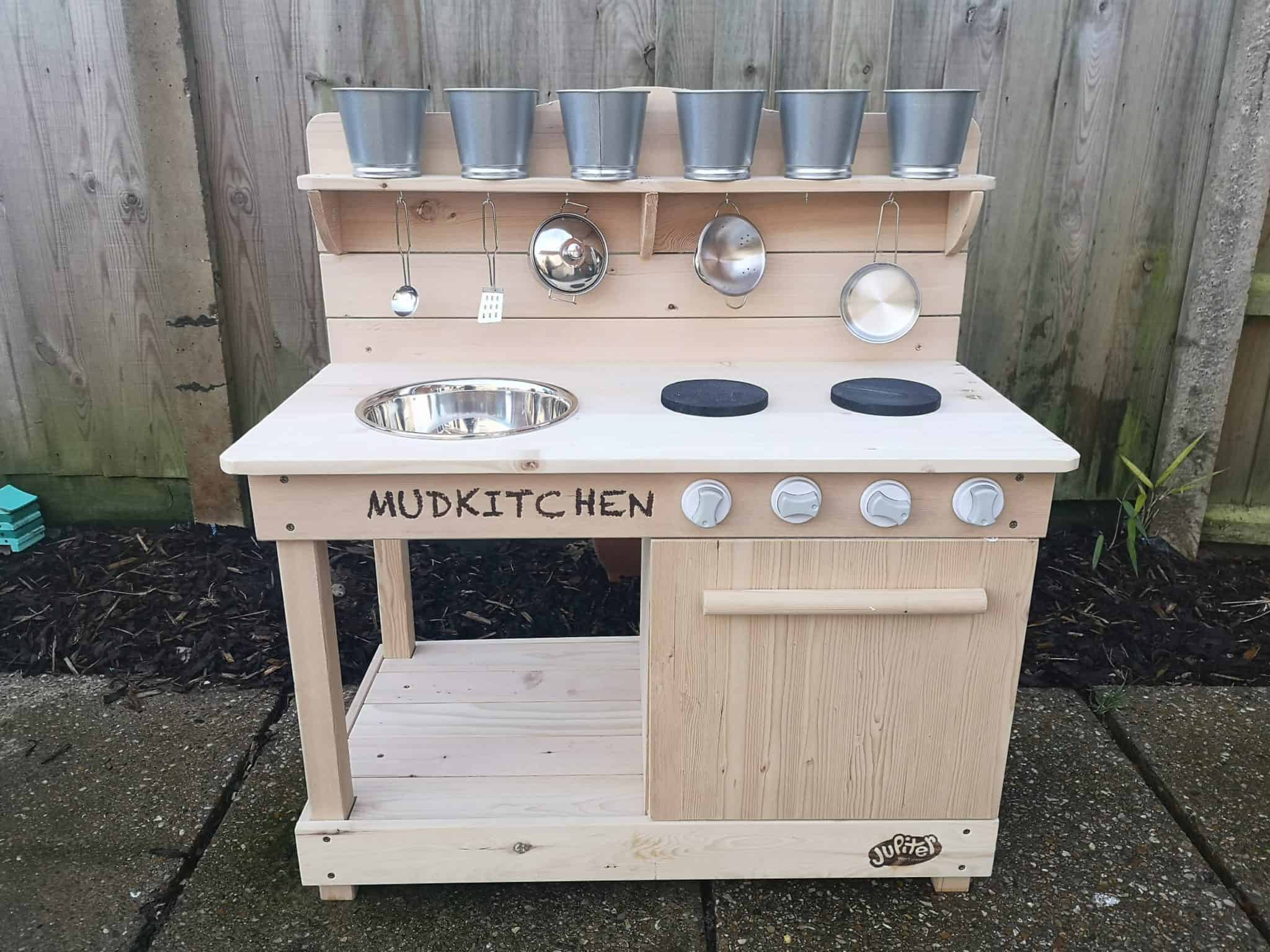 We’re very lucky to have big back garden, even if it’s not the nicest of spaces. However, we have a big patch of lawn and we have a decent sized patio area so there is plenty of room for Erin to play. Something that I’ve wanted to get her for quite a long time is a mud kitchen. She had one at her first nursery and LOVED playing with it. I knew if we had one it would be something Erin got a lot out of and this was what we got her for her 4th birthday. 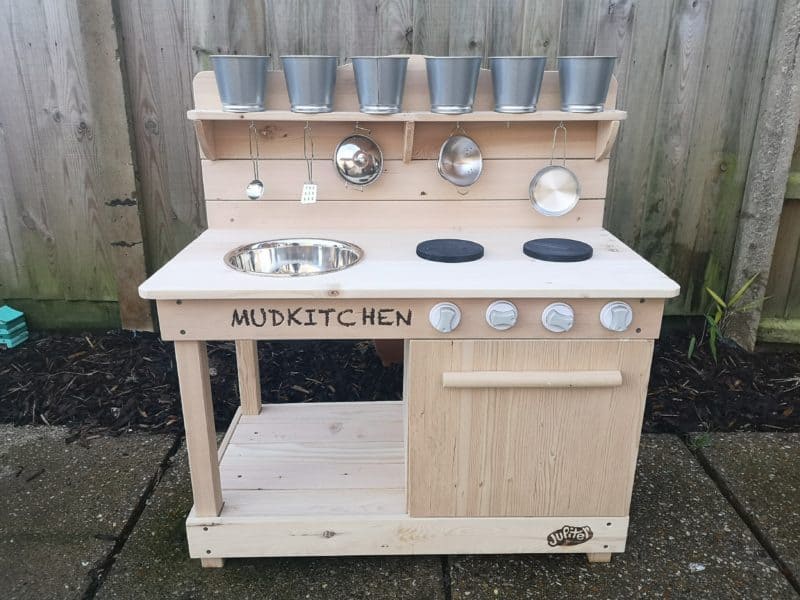 It wasn’t originally the plan to get a mud kitchen for Erin’s birthday but the one we got was on sale for £50. At that price, I knew I had to get it. We actually ended up with it sitting upstairs unmade in my office for about 5 or 6 months because I bought it so early. Having never purchased anything from Studio.co.uk before (where this was from) I had to hope that everything was there and that it was a good buy!

John built the mud kitchen the day before Erin’s birthday and it was all really easy to do. Well, I say that but he did miss a piece off and put one bit on back to front but you know what flay pack is like! Even with the few mistakes it only took maybe 45 minutes to put together and ready to be played with. 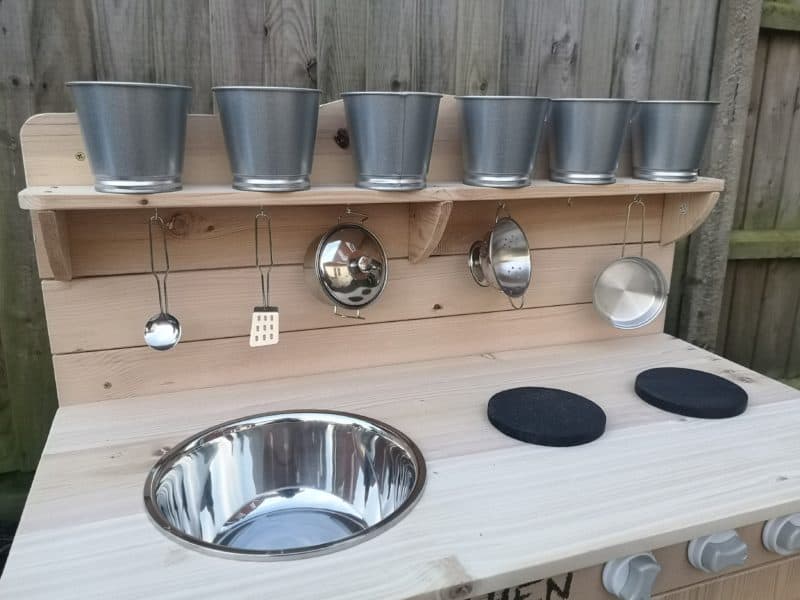 Everything seemed to be really well made and the whole mud kitchen seemed strong and sturdy. The wood isn’t painted so if you wanted to you could easily personalise this for your child and paint it a cool colour. This particular mud kitchen came with 6 hooks and some accessories, a bowl and 2 ‘hob plates’, cupboard and cooker dials. I thought there was a lot there for the £50 price but I think it might have been too expensive at full price. 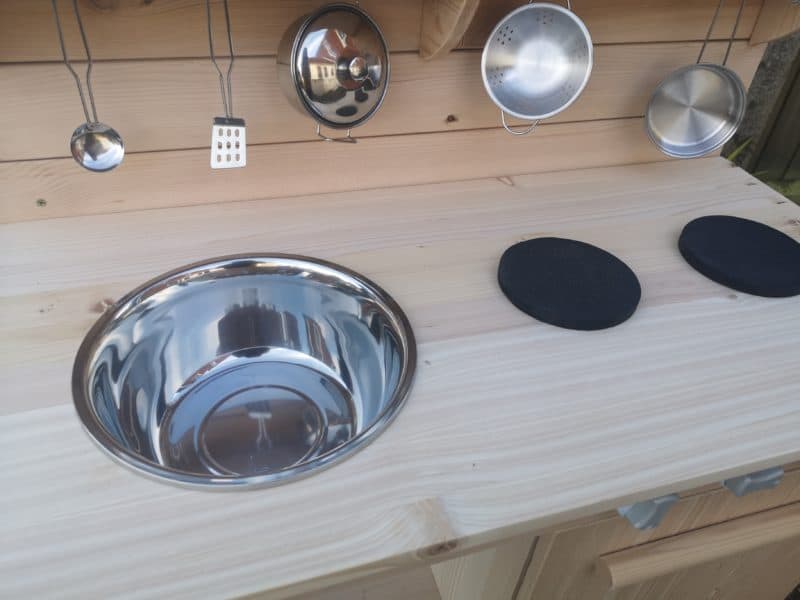 The accessories that came with the mud kitchen were all on quite small. They fit on the hooks underneath the top shelf and really, the spatula alone really wouldn’t pick much up. The pans and colander are quite cute but again, very small so there isn’t too much you can do with them. However, they do fit on the ‘hob plates’ perfectly. 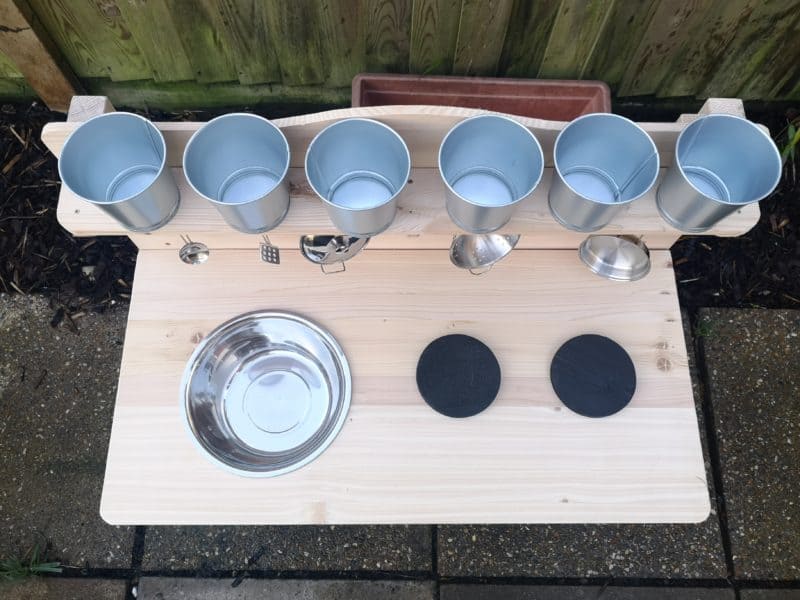 I decided to add some of my own accessories to Erin’s mud kitchen. There was nothing on the top shelf originally but I found these small galvanised plant pots from IKEA for about £1 each. They don’t sell these exact ones any more but if you search you’ll find something similar. I thought these would make great pots for all of Erin’s ‘ingredients’ such as stones, pine cones or shells. 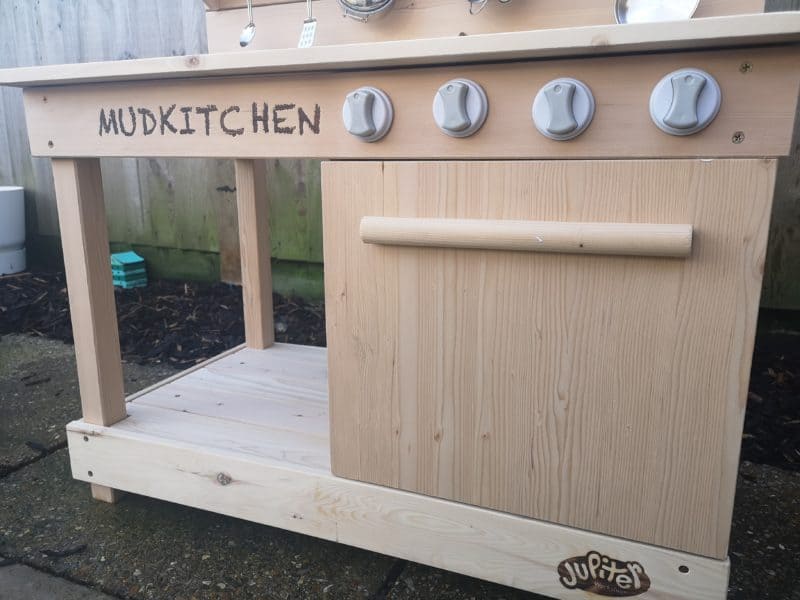 One feature that I did really like was that there was cooker knobs that can actually be turned. I think this adds another element to role playing for children and they can pretend that they are really cooking something. It’s little added extras such as these that make toys a bit more special for the children playing with them. 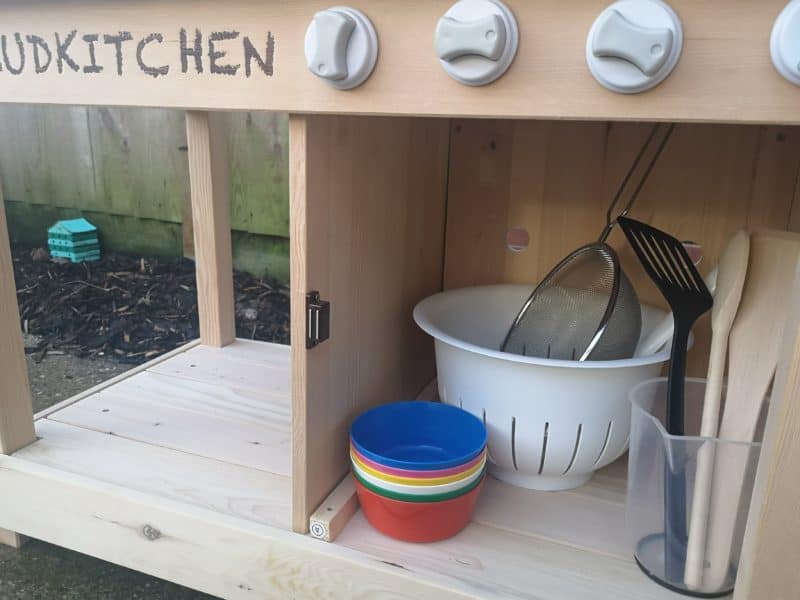 I also really liked that there was a cupboard underneath. As you can see in the picture above, I filled it with some extra accessories that I picked up cheap from IKEA and Wilko. I knew that the accessories that came with the mud kitchen wouldn’t be enough and this was the cheapest and easiest way to stock up. It also means that if Erin’s cousins come over to play at any point there is enough to go around. 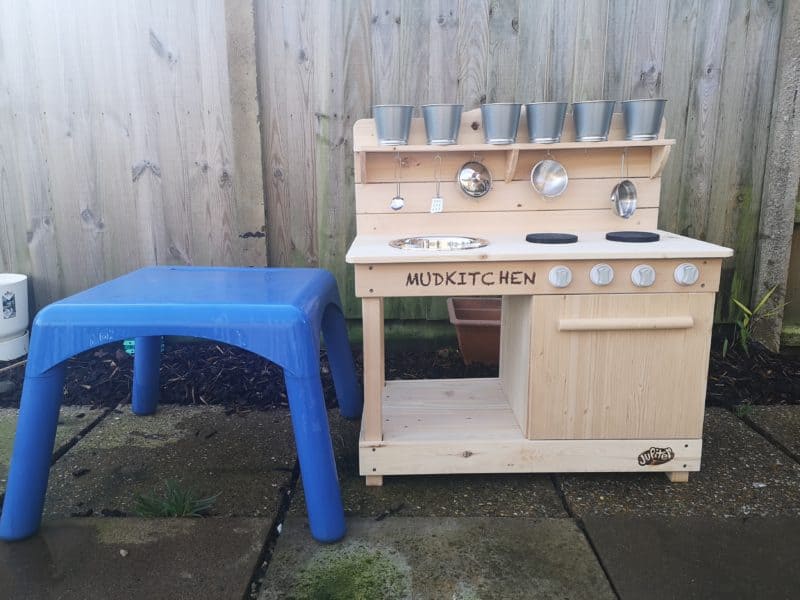 The mud kitchen is a really great addition to our garden and it sits nicely on the patio now, next to the blue ‘kitchen’ table. Erin can sit down and serve up the dishes she has made or she can lay her treats out for everyone else. The table was something we got free from one of John’s friends and it’s been great to have in the garden. 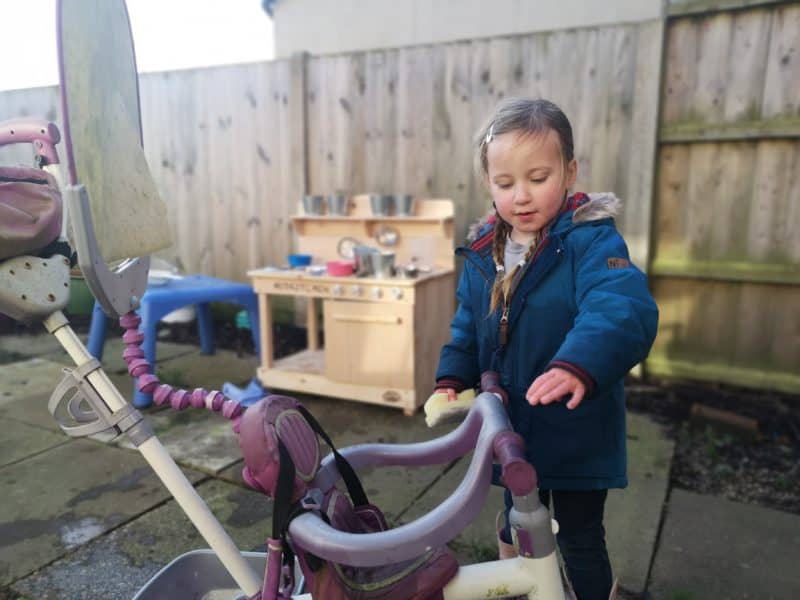 We haven’t been able to get out too much yet to play with the mud kitchen due to it being so cold. When Erin has been in the garden though she has loved using the mud kitchen as a cleaning station and she spent ages getting everything in nice condition again! Mud kitchens can be played with in so many ways and I can’t wait to see what Erin gets up to when we can get outside again. 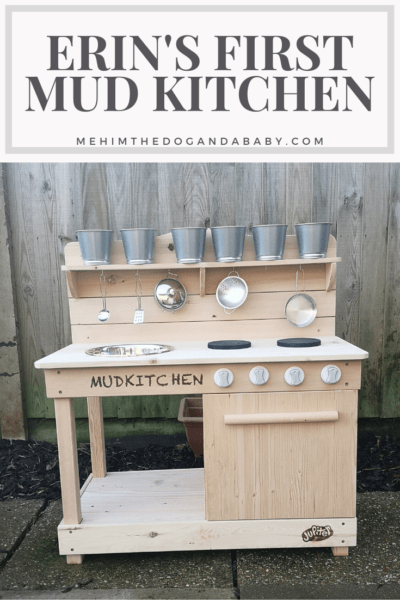