It feels like I’ve written about House for months and months now, and I probably have! I am now, finally, on season 7 so there’s not too much more to go.

Since last month I have really loved character development and the whole feel of the show seems to have changed a bit. It all seems a bit more ‘grown up’ and series compared with the earlier seasons. I can’t wait to see how it all ends.

I know that 13 Reasons Why has had really mixed reviews, especially considering a lot of the subjects that are covered. However, I actually really liked the first two seasons, as hard to watch as they were. I’ve been looking forward to season 3 for ages and it didn’t disappoint.

This season was very different to the other two, although still tackling quite a lot of tough but important issues. Things were tamed down an awful lot this time around so I think some people will be glad about that. I really liked the plot this time and I really was never sure what the outcome was going to be. I liked the suspense and the not knowing because this time nothing was really that predictable.

A few months ago we watched AGT: The Champions on Netflix and loved it. The talent on a show like this is really quite insane and unlike the regular series, everyone is so good. So, I couldn’t wait to watch our version.

Something that hasn’t been mentioned on our show is that quite a few of the contestants were on AGT: The Champions (and didn’t win). It actually seemed like they went to great lengths not to mention this! But, some of my favourites were back like the comedian Preacher Lawson. I think this series has been really exciting and I can’t wait to see what the outcome will be.

It has only been recently that I’ve gotten into Masterchef. I think my Mum was watching it once while she was here and I got a bit addicted.

I have really loved this series so far but the semi finals and the finale haven’t aired yet so I don’t know who won. I have loved certain contestants like Vicky Pattinson and Joey Essex. There have really been some nice surprises and some of the challenges have seemed especially hard this year! I can’t wait to see who wins.

Ah… the film I have been looking forward to for far too long. After how Infinity War ended I NEEDED to see what was going to happen. We were able to borrow the DVD from a friend and it went on at the first opportunity we got.

Unfortunately, I didn’t totally love it. Don’t get me wrong, the film was okay but it wasn’t Infinity War. It’s a long film at nearly 3 hours and the first half really dragged. It wasn’t really until the big fight scene that I was actually really into it. I hate saying that because I wanted it to be amazing the whole way through. That being said, I still cried my eyes out.

Matilda, Ghostbusters, The Wizard of Oz and Return to Oz

Over the past month I have seen all of these films far too many times. Erin has finally decided that she likes to watch films but really doesn’t like anything animated. Erin tends to watch a film, really like it and then want to watch it over and over again for at least a week. Right now we’re stuck alternating between the Ghostbusters films so I’m really hoping to move on to something else soon.

What have you been watching this month? Let me know in the comments. 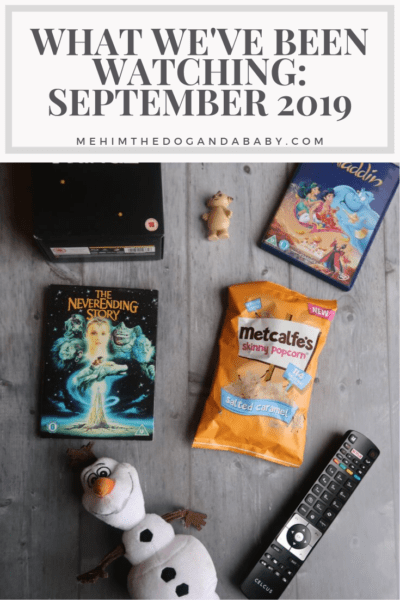