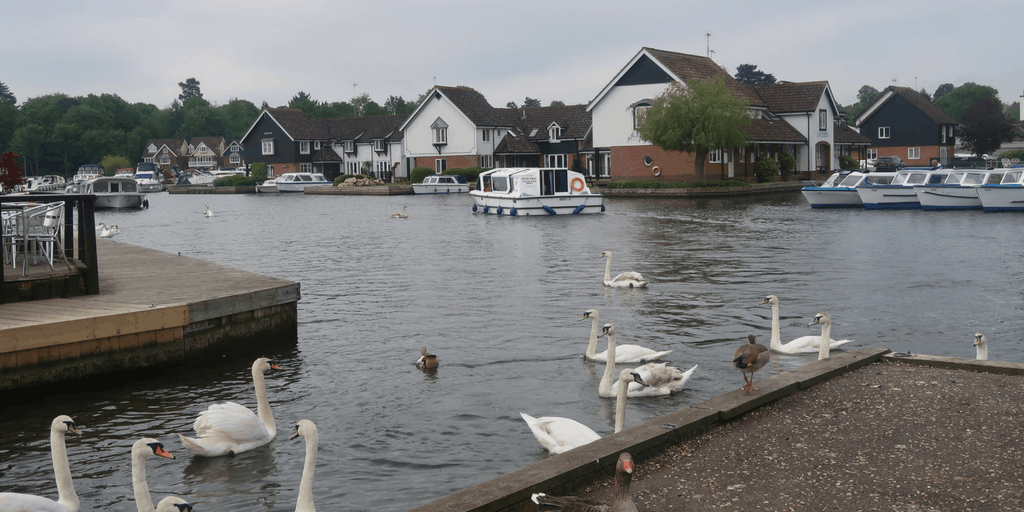 It seems like a strange thing to say but I don’t really get much quality time with Erin. To start with, Erin goes to nursery from 8:45 to 3:30 on Wednesday, Thursday and Friday and we also do swimming lessons on a Monday. I know that leaves us 3 days a week but there are still other things going on. John will take Erin swimming or to the park most Sundays so I generally don’t get time with Erin until the afternoon. We also have my sister and brother in law living with us at the moment and Erin would rather play with them than anyone else most of the time.

I’ve really been missing having time with it just being me and Erin so yesterday we took a short trip on the train and we went to feed the ducks. We actually have no where to feed the ducks where I live so the easiest place for us to get to is Wroxham which is on the Norfolk Broads and generally, there are always ducks, swans or geese waiting to be fed. My mum and sister took Erin to do this a couple of weeks ago and she got really excited about the thought of us going together to do it.

We headed out quite early, getting to Wroxham at just gone 9am so it was pretty quiet. It helped that we went on a school day in term time because there are barely any tourists around at this time so we had the feeding area all to ourselves. When we arrived, there was already loads of swans waiting for some food. 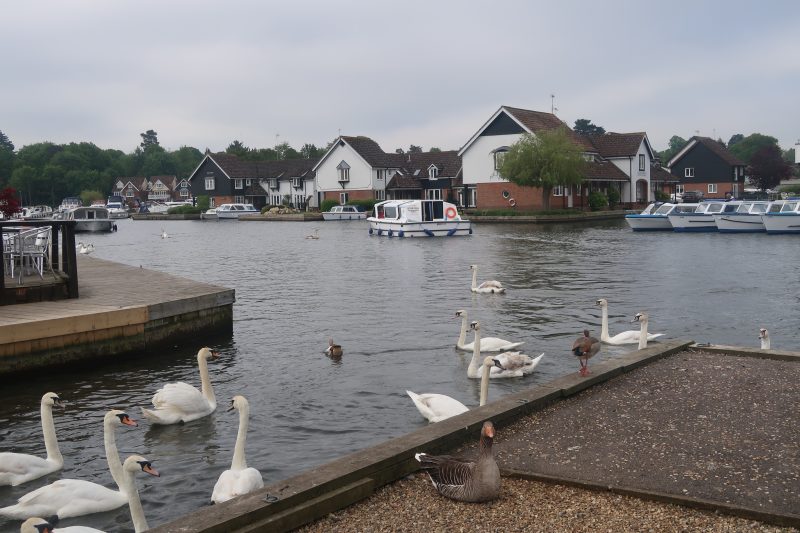 Lots of shops in Wroxham sell duck food so we got a couple of bags for only 50p which really is a bargain. The feeding area is gated so it’s quite a safe area to be in with children and there are the obvious signs about being near the water etc. Erin was really good and never went too close to the edge. She wanted to go off on her own a bit but also stay close enough to me just in case she needed me. 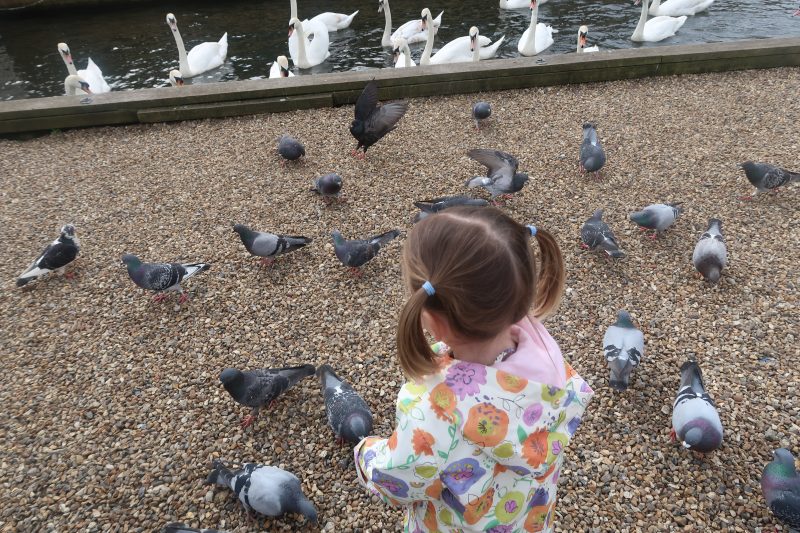 I thought feeding the ducks was a great idea at the time. When I got there though, I remembered just how much I hate animals with beaks. As soon as the swans realised we had food they were getting snappy and a bit mean. Erin and I stayed well enough away from the edge, throwing the food as far as we could, but a couple of mean swans decided to get as close to us as they could. 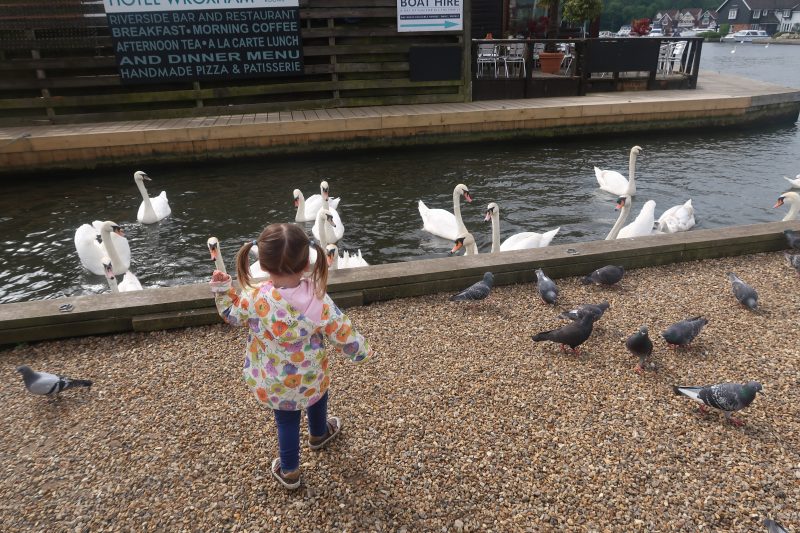 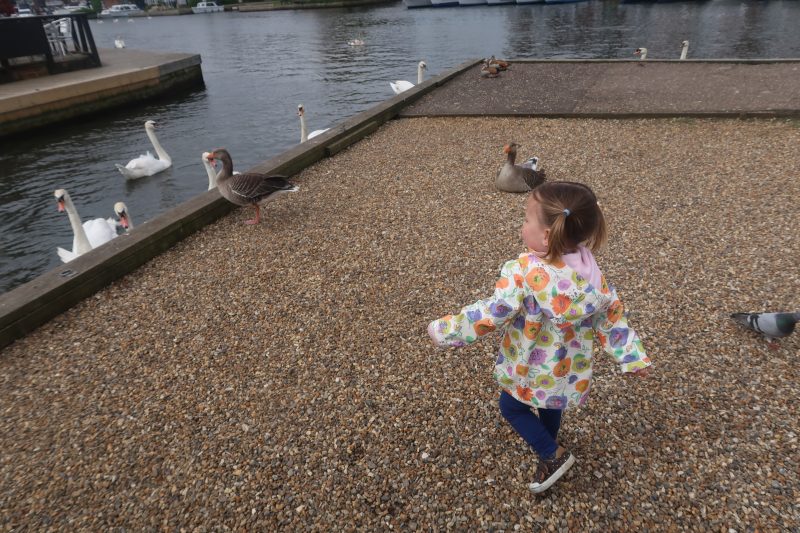 Erin and I ended up being chased out of the feeding area! The swans got really close to us and started snapping and Erin got a bit scared when they did this. We got out of there as fast as we could, throwing food behind us to try to keep the swans away. I think maybe we would have been better off if other people had been there to distract some of the swans instead of them being focused on us the whole time.

After feeding the ducks Erin wanted to go and look in some shops. She loves going and looking in charity shops at the minute, which she calls the ‘small’ shops. We managed to get her 2 new tiny books for 40p and she was really happy with her finds. The charity shops didn’t really have much though and the ones where we live always have a lot more for children so maybe we can do that another day.

We were home by about 12:30 so we only had the morning out and about but after Erin’s nap we had a couple of hours at home before John got back from work.

Even when everyone else isn’t around I think it’s important that I make the time to do something like this with Erin more often. Days out don’t have to cost much and all yesterday cost was train fare and some duck food! 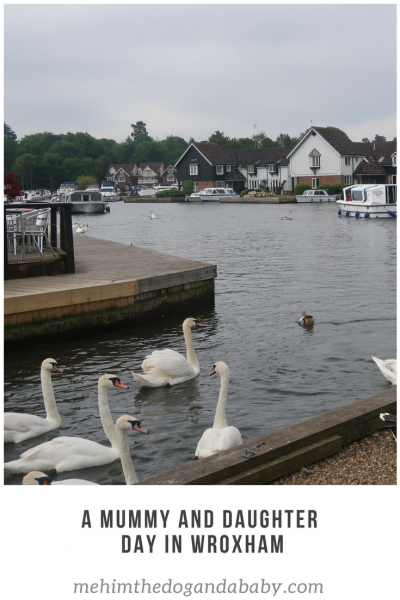 1 thought on “A Mummy And Daughter Day In Wroxham”