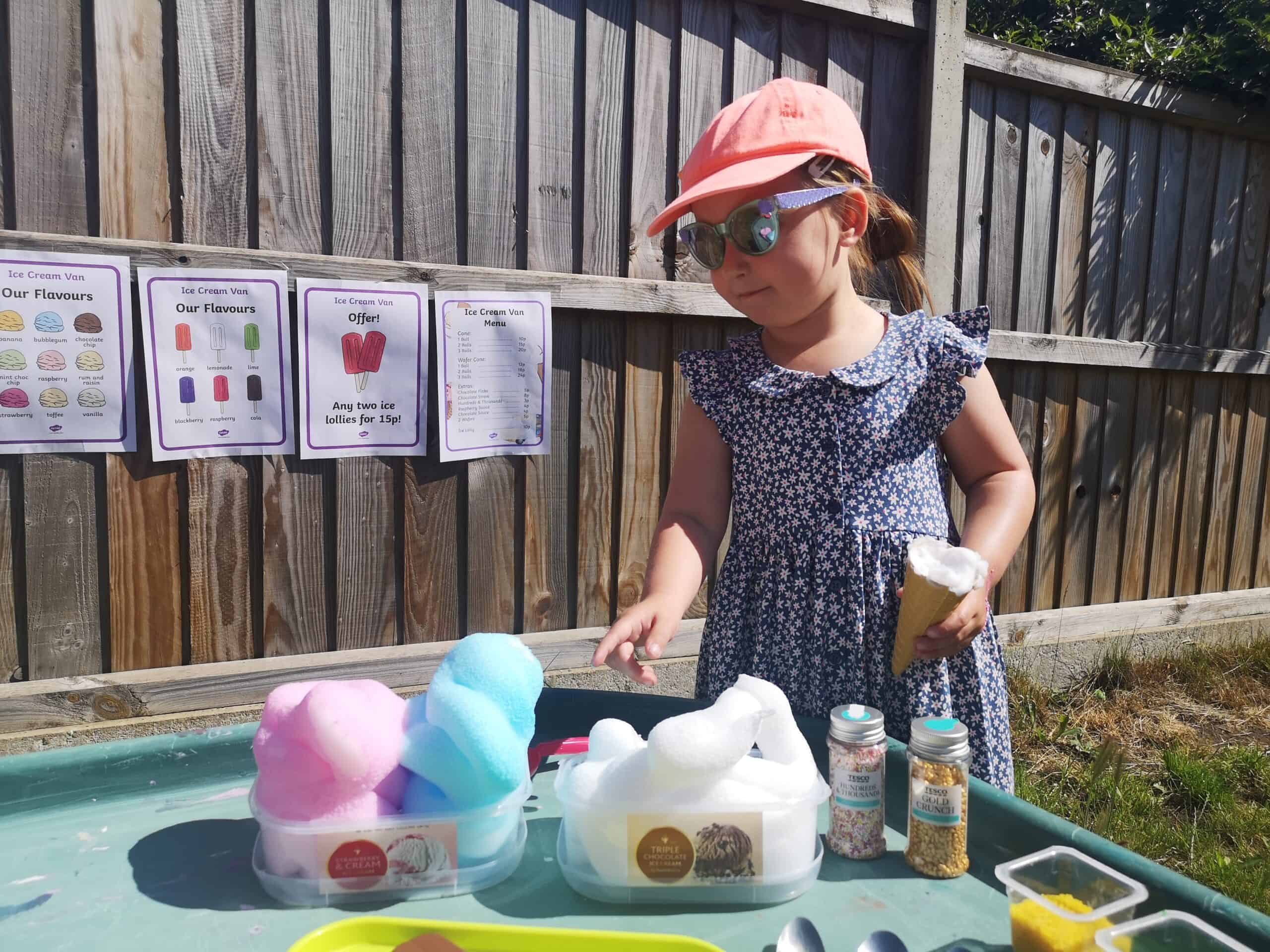 For as long as Erin has understood the idea of imaginative play she has loved the idea of an ice cream shop. There have been so many days where she has stood in her playhouse and pretended to sell us ice creams. So, when I decided to set up a Tuff Tray* with the same idea, I knew that it would be a hit. 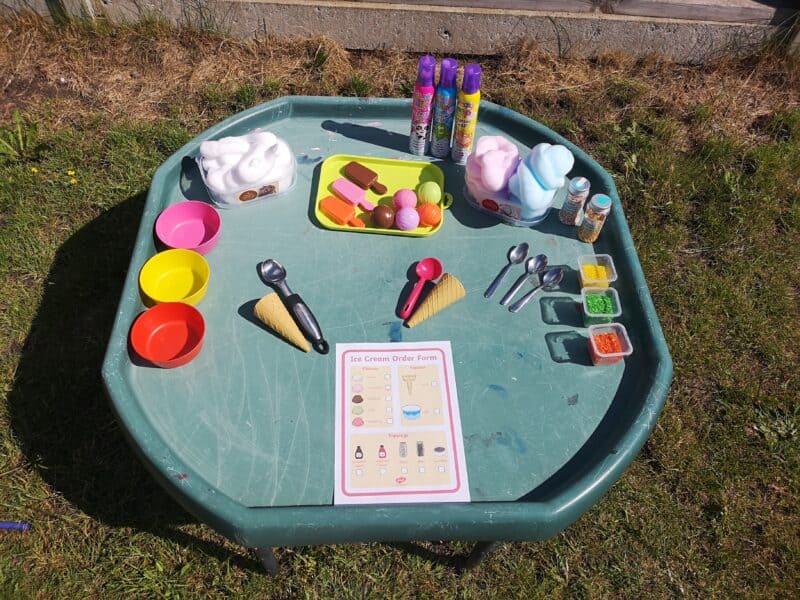 What you will need:

Something to act as ice cream. We used foaming soap in a couple of different colours

Price lists (we printed from Twinkl) 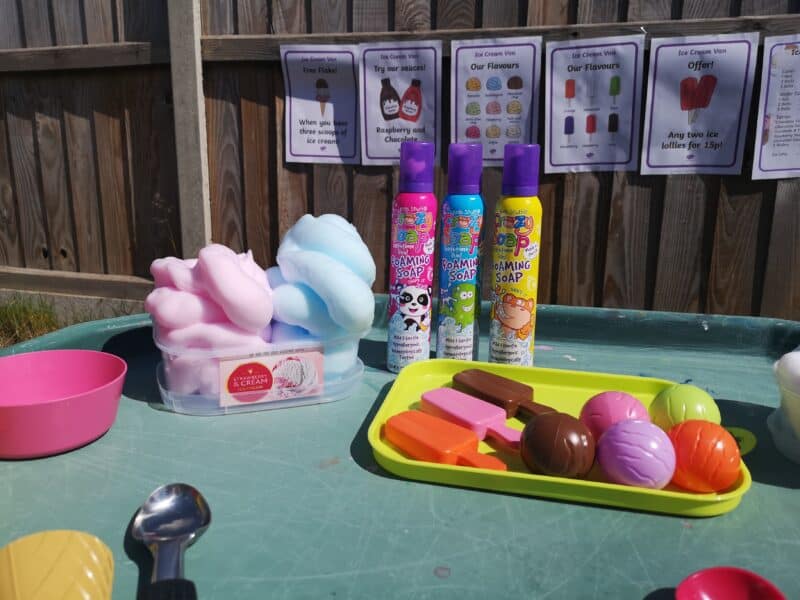 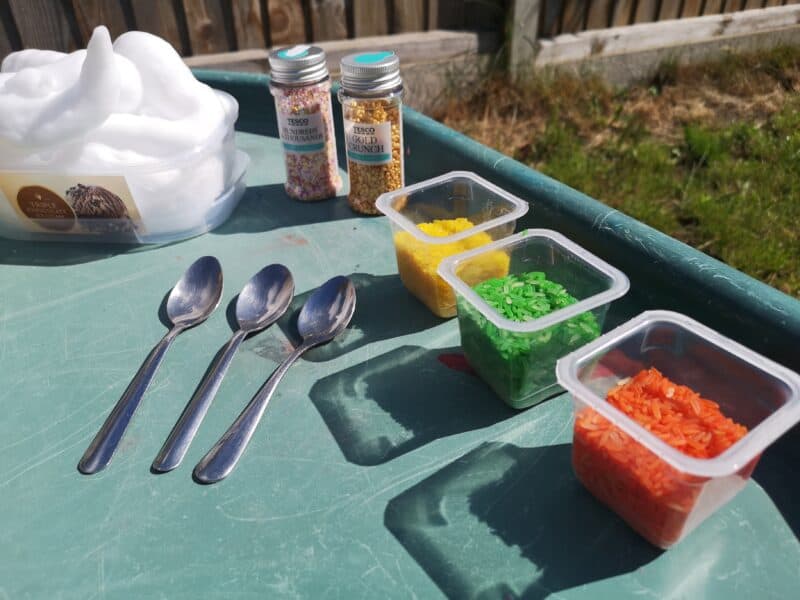 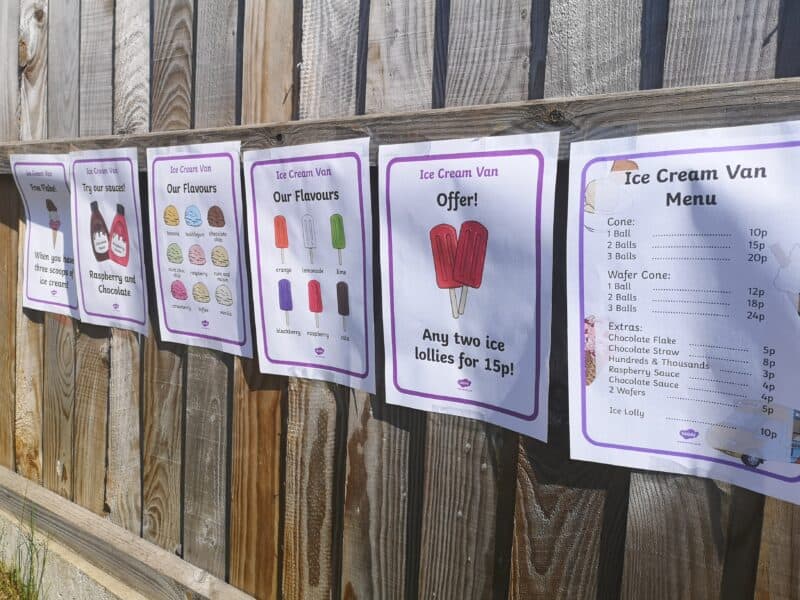 As I had already planned this Tuff Tray in advance I had already printed out some resources from Twinkl. They have quite a lot of different things for ice cream role play and I loved the sheets for an ice cream van. These included a pice list, flavour menus and offers. While we used these mostly for decorative purposes, they are also great for helping children learn about money. This is something we might incorporate into another ice cream Tuff Tray in the future. 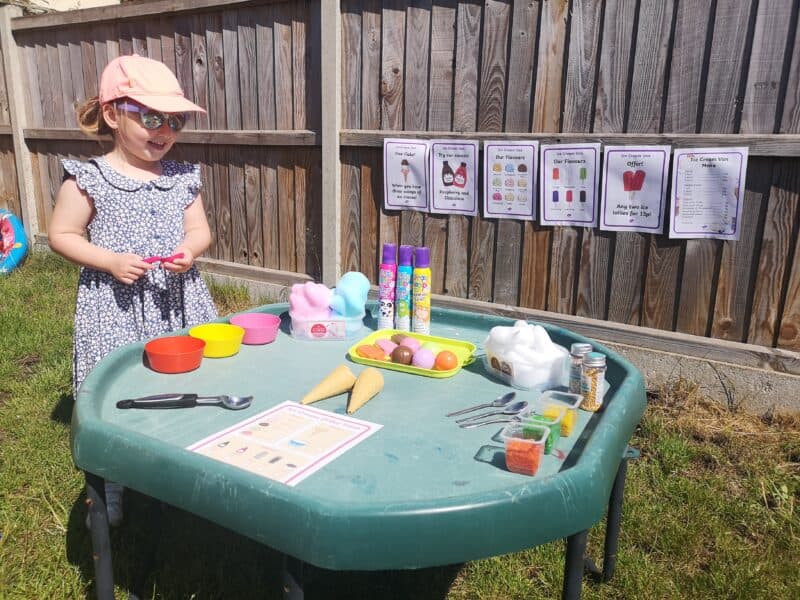 When setting up the Tuff Tray I made sure there was lots of different options for Erin to use. She knows that ice creams come in different ways, such as in a tub or maybe in a cone so we had both of these. The cones, plastic ice cream flavours and ice lollies came from a cheap set from Lidl a couple of years ago.

We then used coloured foaming soap as ice cream and Erin loves this. We had blue, pink and white and I squirted it out into old ice cream tubs that I had saved. Erin was able to use an ice cream scoop to get this up to then make her creations. The great thing about the foaming soap is that because of what it is, it won’t harm your child’s skin as it’s designed to be used in the bath anyway. 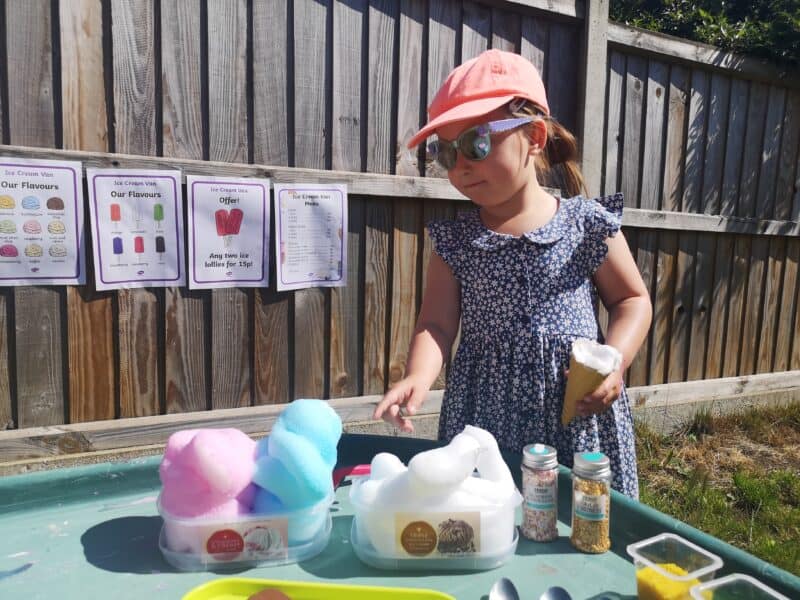 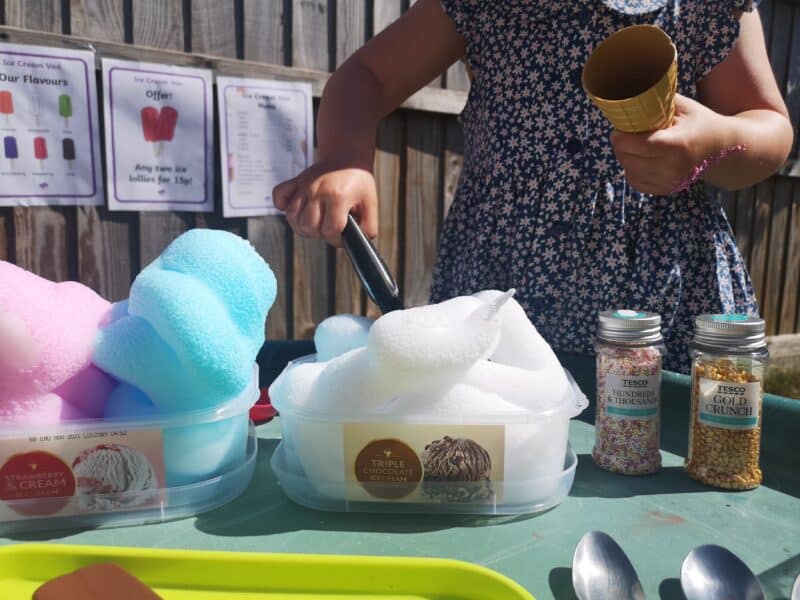 The ice cream shop Tuff Tray is ideal for a warm day, which is when we played with it. Erin made sure everyone had an ice cream and helped us to pick flavours and toppings. I personally loved seeing her getting so creative with what she was making and also that she made sure that all of her customers had beens served. 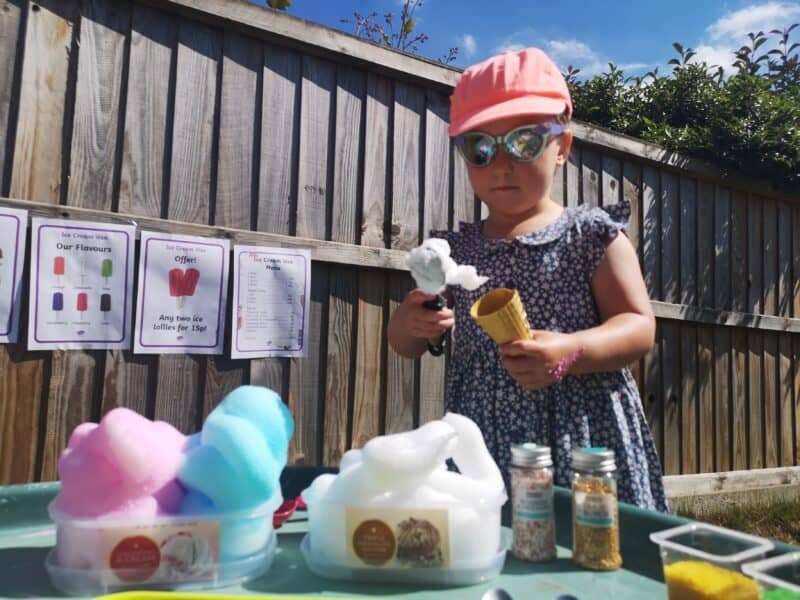 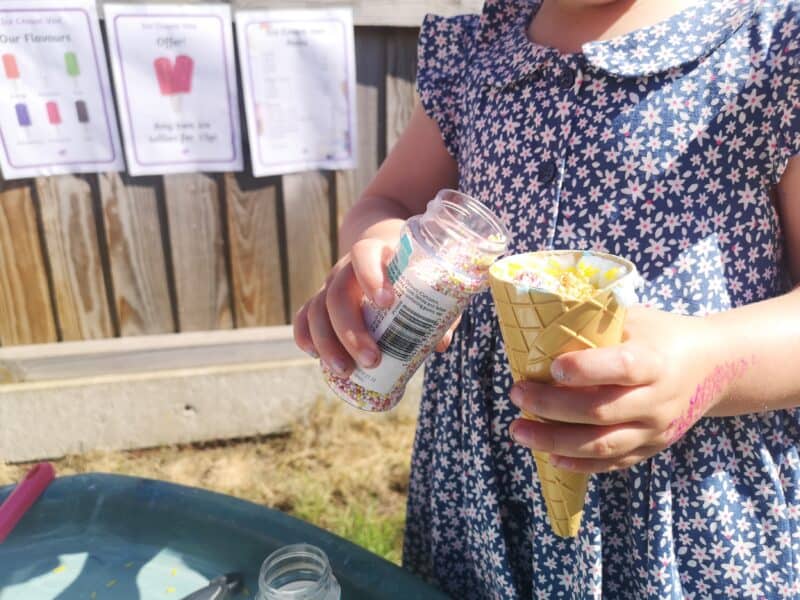 The great thing about this Tuff Tray set up is that you can make it as extravagant or simple as you like. This is one I’d been planning for a while so I had saved up things like ice cream tubs to make it a bit more realistic for Erin. This is also the same for the sprinkles that I’d saved when I cleared out a kitchen cupboard. However, you don’t have to go this far if you don’t want to or if you don’t have the bits at home. The coloured rice that we also used as sprinkles is a much cheaper option and you can do this in bulk. 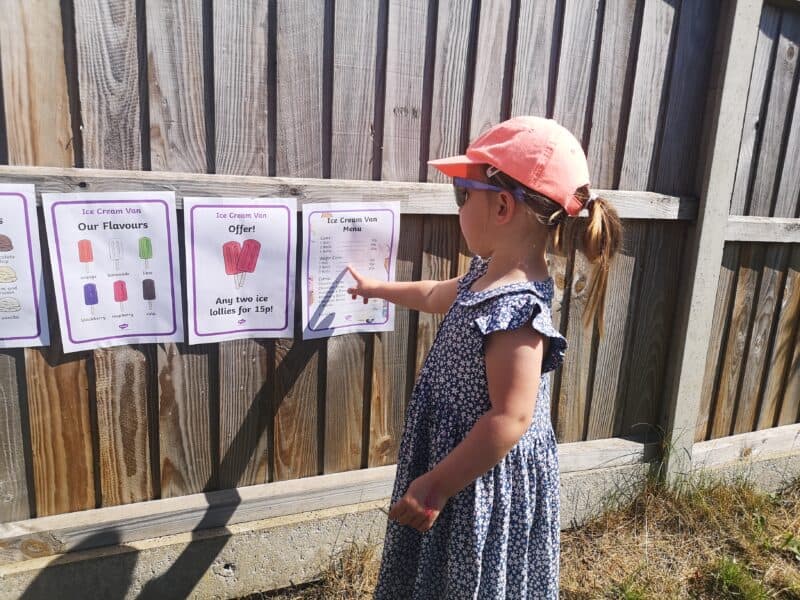 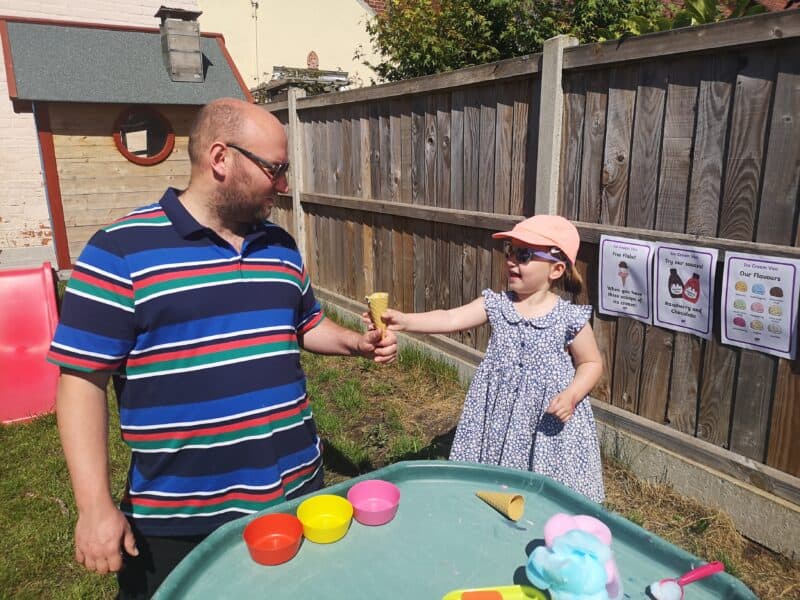 What do you think of the ice cream Tuff Tray? I’d love to hear your thoughts!

Win a bundle of foaming soaps!

Check out some of our other tuff tray ideas: 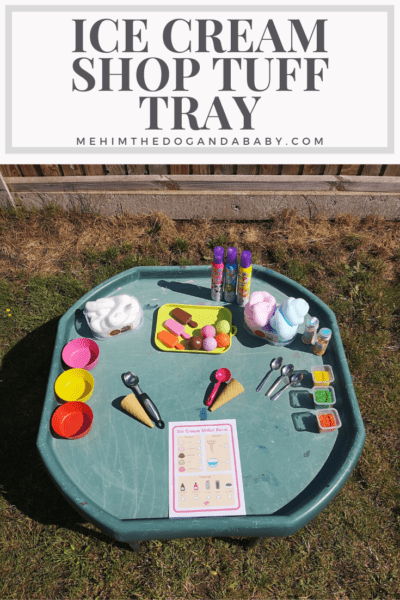