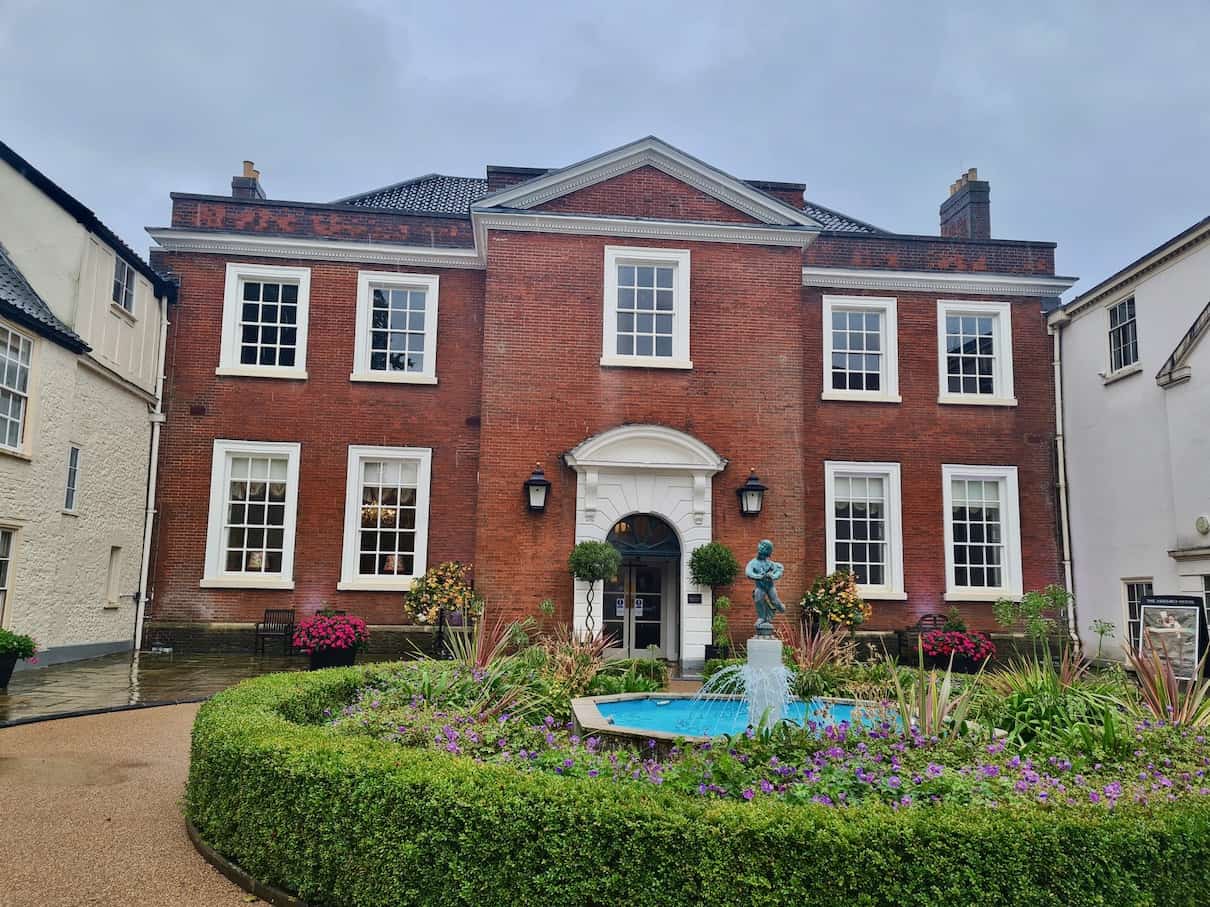 Yesterday was mine and John’s 7 year wedding anniversary. For the past few years we had been going to Center Parcs during this week but now that Erin is in reception we are no longer able to go on term time breaks.

One of my favourite places in Norwich is The Assembly House, somewhere I have been for afternoon tea quite a few times now. They have had an offer on recently that included a stay in any of the rooms, afternoon tea, a bottle of fizz in the room and breakfast the next morning for the bargain price of £180.

John knew that I had wanted to stay there for quite some time, after drooling over the pictures of their rooms on Facebook, so we finally booked a night away for just before our anniversary.

Our celebrations begun with afternoon tea in the restaurant. We had gone into Norwich earlier that day to make the most of our time so we booked lunch for 12pm. The Assembly House do themed afternoon teas all throughout the year and this time it was an Enchanted Forest afternoon tea.

This was John’s first experience of afternoon tea at The Assembly House and I am always excited to see a new theme. I definitely wasn’t disappointed with this one and it looked so magical as it arrived.

One of the great things about eating at The Assembly House is that you never have to wait very long. Drinks are served on minutes after being seated and I think we only waited about 10 minutes for our afternoon tea. I have a very particular way of eating afternoon tea, in a certain order, but John just wanted to dig in! 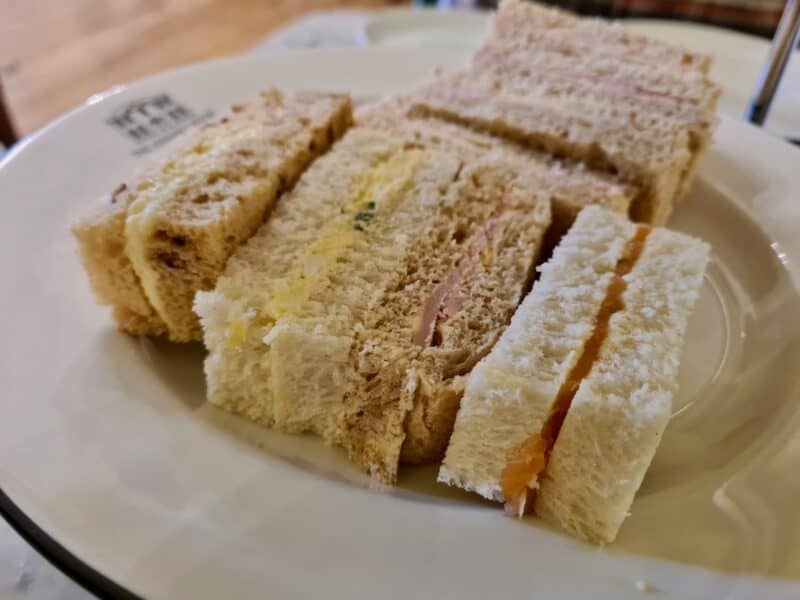 The middle layer had:

After the middle layer we had two different kinds of scones, sadly not pictured but then we moved on to the delicious cake layer:

John and I were both absolutely stuffed and struggled to move a bit after all of this food. The blackberry gateaux opera and the campfire s’mores were my favourite on the cake layer and I think John’s as well!

We had a little bit of time to kill until check in time, which was 3pm so we headed out to do a bit of shopping in the rain.

One of the hardest things about our stay at The Assembly House was choosing which room to stay in. The offer meant that we could choose any room that was available and at the time we booked, that was most of them. After much deliberation we went for room 10, mostly because of the bathroom and the separate lounge area. The rooms are not in the main part of The Assembly House and we had a short walk to the room (thankfully helped by the umbrella we borrowed from reception).

To start with, it’s important to mention that there is no lift to this room and a couple of flights of stairs to get up. This wasn’t an issue for us but it might be for some. Also, where our room was felt really secluded and we only heard slight noise from the wind and rain outside. This really helped to make our stay relaxing, which was exactly what we wanted.

Room 10 comes with a separate lounge area. Sometimes, John will either wake up quite a bit before me or I end up going to bed quite a lot later and this can be tricky being in a room with only a bedroom. We loved having somewhere to chill out and sit and watch TV, as well as have a drink. We also had a desk with Nespresso machine, kettle with other drinks and a mini fridge in a corner of this room.

The bedroom was absolutely beautiful and so cosy, while still having lots of space. I really liked that there was a TV in there as well as the lounge, lots of space to hang or fold clothes and a separate dressing table. The bed was definitely the best part though and as soon as you laid down, you sank into the pillows and the mattress.

One of the biggest features of room 10 though is the bathroom and it was stunning. The roll top bath immediately called my name and I had come prepared with bubbles for later that night. Not only is there a huge bath but there’s a walk in shower and loads of space in the room as well.

As we don’t have a shower at home this is always something both John and I really look forward to using. I hate to say it but we didn’t make the most of it at all and only used it once each in the morning.

The reason we only managed to use the shower once each is because we both took advantage of the roll top bath in the evening, after we had been to the cinema. It had been really cold and rainy that day and we’d been out for most of it. Getting back to the room and being able to run a huge bath was a real treat and I was so glad that I took bubble bath with me.

Sometimes when we go away the last thing I want to do first thing in the morning is have to get ready to go down to a restaurant for breakfast. Although this was a possibility, we were also able to choose to have our breakfast delivered to our room. I’d actually never had room service before so this was really quite something special for me. In order to do this, we had to call reception before 9pm the night before with our choices and to let them know what time we wanted it.

Both John and I were really impressed with the breakfast menu. We thought that we could just choose something from the hot menu (things like a full English, pancakes and various eggs etc.) but we also got a plate of toast and pastries and we were able to choose a cereal and a drink as well. Our breakfast arrived at 7:30, on the dot, and it was really quite exciting. I was also impressed with how the woman managed to get the tray up all of the stairs without dropping anything!

For my hot meal I went for the buttermilk pancakes with fruit and creme fraiche and I was so happy with my choice. They were delicious and a lot more filling than I was ready for. John had chosen salmon and eggs, as it was something he would never normally have at home. Being away for the night without Erin was supposed to be a treat for us both so this breakfast was really something different for us.

We were able to check out from the comfort of our room. We had a balance to pay on our booking and this was done over the phone. I really liked that we didn’t have to go back out to reception if we didn’t want to and it made our morning really relaxed. We were able to leave our keys on the desk and then get on with our day.

Everyone at The Assembly House helped to make our stay as wonderful as it was and John has already said we should go back next year. I’m already eyeing up room 1! 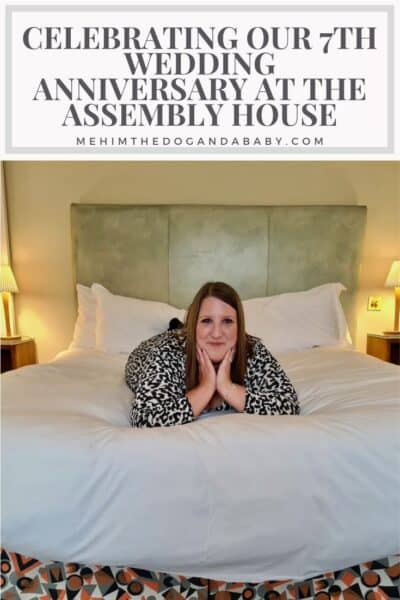